You are here: Home / MidEastGulf / Raqqa cracks down on ISIS 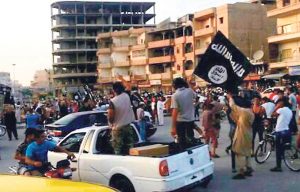 The Raqqa governorate cracked down on ISIS Monday as the Syrian Democratic Forces (SDF) advanced in the western city of Raqqa after controlling the military airport in Tabqa and currently getting closer to tighten the noose on the main stronghold of the organization in Syria, like reported by aawsat.com.

The military advancement accompanied the comments of a leading Kurdish politician, who said that after its liberation from ISIS, Raqqa could join a self-administrated regime currently being established by Syrian Kurdish groups.

“It would be up to the people of Raqqa to decide their future once the city is removed of ISIS,” Saleh Muslim, the co-chair of the Syrian Kurdish PYD party, adding that he thinks the city will join the “North Syria democratic federal” system.

Meanwhile, the US-backed SDF forces temporarily halted their military operations on Monday near the Tabqa Dam on the Euphrates River to allow engineers to carry out urgent maintenance work following concerns that the damaged dam could collapse.

The Combined Joint Task Force said on Monday the dam has not been structurally damaged and that it had not been targeted with air raids.

The Syrian Observatory for Human Rights said technicians inside the ISIS-held Tabqa did not reach the dam during the ceasefire to reactivate its main power controls, adding that the technicians needed at least 48 hours to complete their mission.

At the political level, Syrian delegations and diplomats currently present in Geneva were eager to know whether the mission of UN Special envoy to Syria Staffan de Mistura will be renewed or terminated.

Western sources told Asharq Al-Awsat on Monday: “What is happening in Geneva should not be the hostage of the presence or departure of the UN envoy.”

The sources added that in both cases, “talks on the Syrian crisis should not stop.”