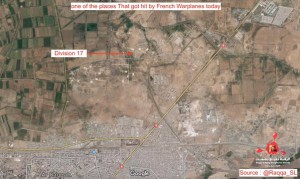 French warplanes have launched 30 airstrikes on more than a dozen Islamic State targets in Raqqa, activists in the Syrian city have said.

The raids were France’s first retaliation to Friday’s coordinated attacks in Paris claimed by Isis, in which at least 129 people were killed.

Residents said the targets bombed in the de facto capital of the militants’ self-proclaimed caliphate included the local Isis political office, the southern entrance to the city and a military camp.

“The French airstrikes were precise and targeted Daesh positions,” said one activist, using an Arabic acronym for Isis. “They hit Isis headquarters and camps that have ammunition warehouses as well as vehicles and [Isis] members.”

Division 17, an army base to the north of the city, had been under Isis control since July 2014.

Isis claimed responsibility for Friday’s attacks in Paris, saying it had targeted France because of its role in the coalition carrying out airstrikes in Syria and describing it as a haven for “crusaders”.

Raqqa activists said Isis members had distributed sweets in the city in the aftermath of the operation, and forced residents to give interviews endorsing the Paris attacks.

The French defence ministry said in a statement that the sites targeted had previously been identified on reconnaissance flights.

The decision to launch retaliatory airstrikes against the group was an act of self-defence, the French foreign minister, Laurent Fabius, has said.

“France has always said that because she has been threatened and attacked by Daesh, it would be normal that she would react in the framework of self-defence. That’s what we did today with the strikes on Raqqa,” he said from the G20 summit in Turkey. “We can’t let Daesh act without reacting.”

The French interior minister, Bernard Cazeneuve, said the attack on Paris was masterminded by terrorist leaders within Syria, who “commissioned” operatives in Belgium to carry out the assault.

“A group situated in Syria … is organising attacks [with] actors situated in Belgium who are not known to our services, and is inciting them to act on French territory, just like they incite them to act in other European cities,” Cazeneuve said in an interview on France 2 TV.

The French airstrikes were followed on Monday morning by US-led coalition raids that targeted positions around the city, including near Ain Issa, a town 30 miles (48km) from Raqqa that was seized by Kurdish fighters earlier this year.

Russian planes also bombed what activists said was a residential neighbourhood, killing five people. They said no civilians were reported killed in the French strikes.

The French raids were launched simultaneously from the United Arab Emirates and Jordan in coordination with US forces, the French defence ministry said.

France is part of a US-led coalition against Isis, and had taken a more active role than other members of the alliance in targeting the group. The country’s leaders are also staunch opponents of the Syrian president, Bashar al-Assad.

The retaliatory strikes were discussed between the French defence minister, Jean-Yves Le Drain, and the US defence secretary, Ash Carter, in phone calls on Saturday and Sunday.