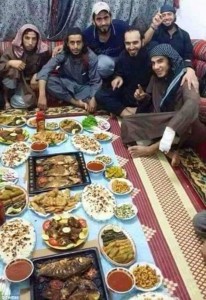 Forty-five terrorists of the brutal Islamic State (ISIS) jihadist regime died on Monday, not from bullets in the heat of a pitched battle but rather from food at a group ‘Iftar’ meal breaking the daytime fast Muslims observe during the month of Ramadan.

The 45 jihadists all died the same night after partaking of the post-fast meal in the northern Iraqi city of Mosul, which ISIS seized last June as it began its conquest of mass swathes of territory in Iraq and Syria.

A joyful spokesperson of the Kurdistan Democratic Party told the Kurdish paper Al Sumaria News about the food poisoning and celebrated it, saying the terrorists deserved their fate for the atrocities they have committed in Mosul and elsewhere.

The exact cause of the food poisoning remains unclear, but there have been cases of ISIS fighters being poisoning by rival rebel groups in the past.

It was reported last November that members of the Syrian Free Army together with local cooks killed dozens of ISIS jihadists in the Fath El-Sahel camp by poisoning their food.