You are here: Home / MidEastGulf / Raids on Popular Mobilization Forces near Syria 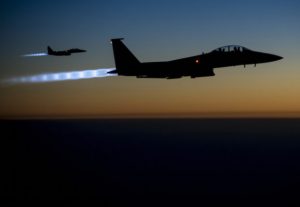 Mysterious airstrikes launched Tuesday against a faction linked with the Popular Mobilization Forces near the US-led international coalition camp of Syria’s al-Tanf, drove disputes between Iraqi officials and members of the coalition fighting ISIS in the war-torn country, like reported by aawsat.com.

Sources from Sayyed al-Shuhada Brigade (The Battalion of the Sayyed’s Martyrs) said that the US army conducted airstrikes last night on one of its convoys, which was moving from inside the Iraqi territories in the direction of the Syrian border, near al-Tanf area.

Many members of the Brigade were killed and injured as a result of the aerial bombardment, including an officer from the Iranian Revolutionary Guards.

A spokesman from the brigade said on Tuesday that at least 36 members of the Sayyed al-Shuhada force were killed and more than 75 others were wounded in the strike.

The US attack is considered the first against militias linked to Iran inside Iraqi territories, although the coalition’s warplanes had already attacked military regime forces and Iranian-linked militia convoys near al-Tanf camp in the east.

For its part, Iran admitted on Tuesday the killing of one of its Revolutionary Guards officers.

Tehran said that Colonel Morteza Hosseinpour-Shalmani from was killed in Syria during an “advisory” mission fighting ISIS forces.

Colonel Abbas Bayrami, assistant of coordination affairs at Al-Quds Brigade based in Gilan province, said on Tuesday that Shalmani was killed during a “consultative mission in Syria” on Monday.

However, Iran’s Fars news agency said that ISIS captured Shalmani during clashes with the Popular Mobilization Forces in an area near al-Tanf, without giving additional information.

Meanwhile, although the International Coalition has denied its involvement in the raid, Iraqi Prime Minister Haider al-Abadi said Tuesday “the international coalition has no authority to carry out bombardment without the knowledge of Iraq.”