You are here: Home / Europe / Raid under way in Brussels

Belgian police are searching a building in the central Brussels district of Etterbeek as the hunt for those responsible for terrorist attacks continues. 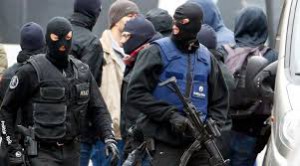 Belgian police backed by sharpshooters are searching a building in the central Brussels district of Etterbeek and have evacuated its inhabitants, a Reuters journalist at the scene says.

The building, an apartment complex with a shop on the ground floor, was cordoned off by police and forensics experts were seen entering the building. Police said snipers had also been deployed.

On Friday, police detained two key suspects in the Islamic State attacks on Paris and Brussels as they pursued operations to track down militants who have fought with or take direction from leaders in Syria.