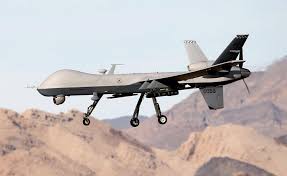 Following an attack in the west of Baghdad on Iraqi troops, who the UK has trained across the Middle Eastern country, coalition support was deployed in Anbar province on 6 October.

A coalition air strike was then launched against the so-called Islamic State members, which official sources say killed half of the small militant group.

An RAF Reaper on daily armed reconnaissance patrol was then called in to locate and eliminate the remaining threat to the Iraqi forces.

The Ministry of Defence says there was no clear potential for collateral damage to civilians or friendly forces, before the Reaper launched a GBU-12 guided bomb against the IS militants.