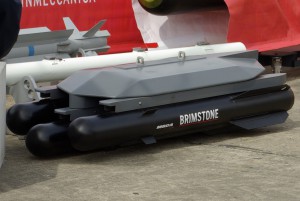 RAF jets have fired Brimstone missiles at Islamic State targets in Syria for the first time, Downing Street has confirmed.

Designed to hit smaller, moving targets, they were launched during missions against terror targets on Sunday.

The missiles detonate a tandem charge on impact to ensure penetration of armour.

They were fired at two targets – a supply truck near Raqqa and mobile cranes trying to repair part of the Omar oil field damaged in recent strikes.

Brimstone missiles have previously been used against IS targets in Iraq.

They are well suited to attacking moving vehicles and are only used by the RAF and the Saudi air force.

“A lot was made of this Brimstone missile in the lead up to the vote on Syria because the Government said this was an extra dimension in the war against Islamic State,” said Sky News defence correspondent Alistair Bunkall.

“What they can do is target, in particular, moving vehicles – that’s where they are very effective. It’s something the Americans don’t have and the Americans were keen to see in the game.”

A pair of RAF Tornados also dropped four laser-guided Paveway bombs on a tunnel complex near Raqqa on Sunday, while a Reaper drone attacked a terrorist position with a Hellfire missile.

More than 1,000 drone sorties have now been carried out against Islamic State, also known as Daesh, since October 2014, the Government said.