Despite the risks, Alghad FM broadcasts information and commentary into the ISIL stronghold via frontline transmitters 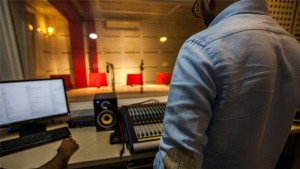 Mohammed al-Musalli sits tensely in his office on the first floor of a residential house in a guarded compound in Iraq’s Kurdish region.

As he begins to speak, he shifts nervously and fiddles with the ring on his finger.

“Islamic State members may find this place. We cannot run that risk,” he tells Al Jazeera, referring to the Islamic State of Iraq and the Levant (ISIL, also known as ISIS) group. “I am from Mosul. I was there when ISIL came into the town during the summer of 2014. I managed to escape with my family, but we lost everything.”

Musalli, 28, is one of the founders and managers of Alghad FM, which he describes as the first radio station to broadcast music and cultural programmes into an ISIL stronghold 24 hours a day, seven days a week.

After his family fled Mosul in June 2014, leaving all their possessions, friends and relatives behind, Musalli said that he began to feel guilty for those still trapped in the ISIL-held city.

“It was impossible to keep in contact with those who were besieged inside. I thought that a radio could be the only way to communicate with my people,” he said.

Musalli, who studied engineering technology in the United States, quickly began to develop his plans, researching how such a station could be set up and learning the process as he went along. In March 2015, after obtaining authorisation from the Kurdistan Regional Government (KRG), he and two other station founders went to a frontline location to install transmitters to broadcast the FM signal into ISIL-held areas.

The location was only a few kilometres from ISIL outposts, he said.

“The hardest and most dangerous part was to reach those areas and to put the transmitters near the frontlines without being intercepted,” Musalli said, sitting at his desk in front of a battered computer. “We drove to the place in the early morning. I was thinking more about the distance between us and Mosul [for the signal strength].”

It took them seven hours to install the necessary transmitters, antennae, internet infrastructure and backup electricity, he said.

Asked about the station, KRG spokesman Safin Dzayi told Al Jazeera: “[We] support all the initiatives to defeat Daesh [ISIL] in terms of military, cultural or psychological efforts. Military operations are not enough for the liberation of Mosul. It’s necessary to have support from the local population.”

When the station went live in March 2015, the reaction was almost immediate. With the transmitters outside the group’s reach, ISIL banned the sale of radios in Mosul after just one week, Musalli said – but with a radio already installed in almost every car and most houses, it was impossible to silence the airwaves.

Instead, ISIL set up its own station in Mosul to broadcast on the same frequency and obstruct Alghad FM, he said, citing information from sources inside the city.

But Musalli and his colleagues were undeterred. After a few months, they returned to a different frontline location and installed more transmitters, giving themselves the ability to broadcast over multiple frequencies. They relied on the feedback of listeners to know whether they were being heard in the occupied city.

“Even today, ISIL is jamming one of our frequencies, but we were able to broadcast over their radio stations,” he said.

Alghad FM broadcasts a range of programmes, from talk shows, to health coverage, to shows about food and sports. It also airs cultural programmes focusing on poetry, religion and entertainment.

One programme, called “I am a Citizen”, allows people to vent their frustrations about everything from life under ISIL to more routine daily annoyances. In one recent episode, a woman named Fatima phoned in to complain about schooling: “My children have not been to school for two years. I hide them, because I don’t want them attending [ISIL-run] schools. I hope that when all this will be over, they will be able to start studying again.”

There are also call-in sessions to discuss major issues affecting Mosul, such as new rules or punishments imposed by ISIL.

“We have our network [of people inside Mosul] who help us to understand what is happening,” Musalli said. “If we know that ISIL has a new policy or they are punishing people, we bring this topic to the centre of the show, and we let citizens pour out [their thoughts].”

Qassim Khidhir, a project manager with the Media Academy consultancy in Iraq, said that Alghad FM has broken a key barrier by becoming the only station to broadcast into Mosul, after ISIL destroyed radios and satellite dishes inside the city.

“Alghad FM is effective and influential for two reasons,” Khidir told Al Jazeera. “ISIL tried to overcome their frequencies, and this shows that they are doing well, because [ISIL fighters] are upset. The second reason is the possibility for the people inside to talk and to be listened to … It’s the only way to express themselves.”

Over the months, Alghad FM has become a space where people from Mosul can talk freely about their problems, their hopes and their dreams for the future.

“Some people are scared and they are just passive listeners, but we receive many phone calls, especially from women, to tell us about daily life in Mosul,” Musalli said, noting that the station also receives calls from ISIL members.

In one recent incident, a caller purporting to be affiliated with ISIL warned: “I will be the one who will blow himself up when I come, because we will reach you soon.” Despite such threats, Musalli has told contributors not to cut any phone calls.

Although the station only broadcasts in and around Mosul, listeners in Europe, Turkey and the US tune in via the internet stream. At the beginning of August, one man called in with a message for his mother: “Mum, if you are listening, I want to tell you that I’m alive and in Sweden,” he announced.

According to the International Committee of the Red Cross, more than one million civilians are still living under ISIL rule inside Mosul. For many, Alghad FM has become not just a way to break their isolation, but also a form of resistance.

“If I chose to stay in Iraq,” Musalli said, “it is because it is our duty do our best in order to bring back the city to what it was before, where all the communities coexisted in the same territory.”