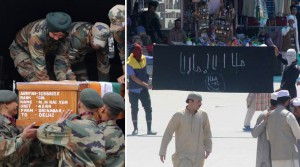 The refusal of Kashmiri separatist leaders to meet an all-party Indian parliamentary delegation led by India’s Home Minister, Rajnath Singh, that visited Kashmir on September 4-5 to strike a political solution for the strife-torn state, was hardly surprising.

The separatist leaders in Kashmir, as often happens with opponents (such as the Palestinians or Iran) seem to take any willingness to negotiate as sign of weakness, and start pursuing their own agendas with even more aggression.

“They [the separatists] are not ready for it [a political solution]. They are not ready even to open their doors. They enjoy fuelling violence and getting innocents killed,” said Ram Madhav, General Secretary of the ruling Bharatiya Janata party.

If New Delhi is serious about establishing peace in the Kashmir Valley, it is futile to waste any more time with separatist leaders belonging to the All Parties Hurriyat Conference (APHC), a united front of 26 political, social and religious organizations all committed to the cause of Kashmiri independence from India. It would be naïve to entertain any hope of a positive response from them.

The history of the behaviour of APHC leaders and similar groups shows that they evidently have little interest in the values of peace, secularism and development, which are dear to India and all democratic societies. Their agenda has consistently been one of radical Islamist rule in Kashmir. Their approach during the current crisis there merely confirms this pattern. They continue to spread a message of hatred and violence against the Indian authorities by portraying them as “anti-people.”

These separatists are allegedly aligned with the establishment in Islamabad, Pakistan, to foment unrest in Kashmir. APHC leader Ali Shah Geelani holds an Indian passport, only to indulge in an anti-India rhetoric . On August 14, 2015, another separatist, Asiya Andrabi,hoisted the Pakistani flag in Jammu and Kashmir. Both Geelani and Andrabi addressed a Jama’at-ud-Da’wah rally in Pakistan, led by Hafiz Saeed, a co-founder of Lashkar-e-Toiba and chief of Jama’at-ud-Da’wah, which has had sanctions placed against it by the United Nations as a terrorist outfit promoting an anti-India agenda.

These leaders also seem to have financial interests in being close to Pakistan. Recently, the separatist Syed Ali Shah Geelani’s son, Nayeem Geelani, has come to the attention of India’s National Intelligence Agency, for having transferred a large amount of money into the bank account of reported terrorist, Syed Salahuddin, based in Pakistan-occupied Kashmir.

The government of Pakistan, which provides scholarships for the “deserving students” from the Kashmir Valley in the fields of medicine and engineering, seems to have given a free hand in selecting the recipients to APHC leaders, who have apparently been selling the scholarships for personal gain, for Rs 10-15 lakh each (USD $15,000-$22,500).

As most of the APHC leaders are now old, control of the “resistance movement” has, over the years, slipped into the hands of “educated young men from well-to-do families who have chosen the path of violence under the influence of radical Islam.”

These younger separatists have a greater penetration in their communities. At the funeral prayers of the Hizbul Mujahideen militant Burhan Wani, killed by Indian security forces in July, there was a massive crowd with some estimates putting it at 200,000.

The younger separatists also seem under the influence of Islamabad: the green flag of Pakistan has become “ubiquitous” at their protests in the Valley.

It is reassuring to hear that New Delhi has recently decided to crack down on the separatist elements in the Valley. The government has decided to stop security arrangements, foreign trips and medical treatment that have long been provided to separatists.

New Delhi has also judiciously put several Army reserve units on alert “to crack down on those instigating violence and choreographing, stone pelting mobs in Jammu and Kashmir.”

The regional government in Srinagar has also finally begun to deal with unrest in the Valley, and has instructed the police and the Central Reserve Police Force on crowd- and riot-control in the troubled region .

One hopes that New Delhi and Srinagar will continue to implement these policies to restore normalcy to the region.