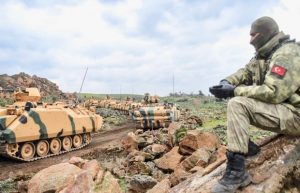 Qatar has thrown its weight behind Operation Olive Branch, Turkey’s military offensive against Kurdish-held Efrin in Syria, coming to the defense of the “national security” of one of its closest allies, like reported by thedefensepost.com.

“The state of Qatar reaffirmed its support for the efforts of the republic of Turkey to maintain its national security in the wake of the breaches and terrorist attacks carried out inside Turkish territories,” foreign ministry spokeswoman Lolwa Al-Khater said.

Speaking to Qatari media on Monday, Khater said Turkey’s launch of Operation Olive Branch was “driven by legitimate concerns related to its national security and securing its borders, as well as protecting the territorial integrity of Syria from the danger of secession.”

Qatar’s announcement came as Turkey’s President Recep Tayyip Erdogan vowed to step up an offensive against Kurdish targets in neighboring Syria and Iraq.

The operation, which includes an air and ground campaign involving Ankara-backed Syrian rebels, aims to oust the People’s Protection Units (YPG) from Efrin in northern Syria.

Turkey views the predominately-Kurdish YPG, which makes up the backbone of the Syrian Democratic Forces, and its linked PYD political party which control Efrin as extensions of Turkey’s Kurdistan Workers’ Party (PKK), which has fought a decades-long insurgency mainly in Turkey’s majority-Kurdish southwest.

The YPG denies aiming for separatism.

Turkey’s offensive is complicated by the United States’ relationship with the YPG, which it relied on to help oust Islamic State from their Syrian strongholds.

Qatar has grown closer to Turkey since June when Saudi Arabia, the United Arab Emirates, Bahrain and Egypt cut all relations with Doha, which they accused of ties to Islamist extremists and Iran.

Ankara has since stepped in, providing food imports and political backing to Qatar amid the boycott.

The offensive on Afrin has also surfaced as a point of contention among the Gulf states.

“The developments around Afrin reaffirm the need to rebuild and restore the concept of Arab national security,” Gargash tweeted.

“Without that, the Arabs will be marginalized.”

Turkey has a military base in Qatar and both countries have been unstinting in their opposition to Syrian President Bashar al-Assad.