You are here: Home / MidEastGulf / Qasim Soleimani fails to end protests in Iraq despite his orders to suppress them 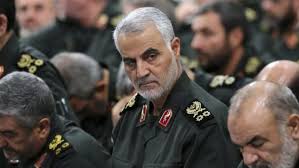 The Commander of the Iranian Quds Force, Qasem Soleimani, attended an Iraqi security meeting instead of Prime Minister, Adel Abdul Mahdi, which surprised present officials. Soleimani vowed, according to AP agency, to suppress the demonstrations but failed so far, like reported by shafaaq.com.

AP also confirmed in its report that Iran was losing influence in Iraq and Lebanon because of the failure of its agents to maintain that influence.

The day after anti-government protests erupted in Iraq, Iranian Gen. Qassim Soleimani flew into Baghdad late at night and took a helicopter to the heavily fortified Green Zone, where he surprised a group of top security officials by chairing a meeting in place of the prime minister.

“We in Iran know how to deal with the protests,” he told Iraqi officials. “This happened in Iran and we took control of it,” according to senior officials familiar with the meeting who spoke on condition of anonymity.

The day after Suleimani’s visit, clashes between demonstrators and security forces in Iraq became much more violent, with the death toll rising to 100 after unidentified snipers fired at protesters in the head and chest. About 150 demonstrators were killed in less than a week.

According to the agency, The arrival of Soleimani, the head of Iran’s elite Quds Force and the architect of its regional security apparatus, signaled Tehran’s concern over the protests, which had erupted across the capital and in Iraq’s Shiite heartland, and included calls for Iran to stop meddling in the country.

But nearly a month later, the protests in Iraq have resumed and demonstrations continue in Lebanon, both directed at governments and factions allied with Tehran. The protests threaten Iran’s regional influence at a time when it is struggling under crippling U.S. sanctions.

During renewed protests this week, men in black plainclothes and masks stood in front of Iraqi soldiers, facing off with protesters and firing tear gas. Residents said they did not know who they were, with some speculating they were Iranians.

The report notes that the protests in Iraq and Lebanon are fueled by local grievances, and are directed mainly at political elites allied with Iran, a challenge to Tehran, which is closely supporting armed militias in each country.

The increasingly violent crackdown in Iraq and the attack by Hezbollah supporters on the main protest camp in the Lebanese capital Beirut have raised fears of a backlash from Iran and its allies against the demonstrations.

For his part, Iraqi security analyst, Hisham al-Hashemi said, “Iran fears these demonstrations, because it made the biggest gains in the government and parliament through the parties close to them since the US-led invasion of Iraq in 2003.”

As Hashemi pointed out “Iran does not want to lose these gains. It has tried to work through its parties to contain the protests in a very Iranian way,” referring to its failure to contain the demonstrations.

According to the report , the protests in Iraq resumed Friday after a brief hiatus, with protesters massing in Baghdad’s Tahrir Square and clashing with security forces as they tried to breach barricades on a bridge leading to the Green Zone, the seat of the government and home to several embassies. In southern Iraq, protesters have attacked and torched the offices of political parties and government-backed militias allied with Iran.

South of Iraq, protesters burned the offices of political parties and militias backed by the Iranian-allied government.

AP also stressed in its report that Iran is losing influence in Iraq and Lebanon because of the failure of its agents to maintain this influence.