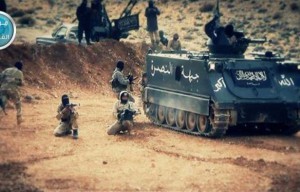 The coalition of rebels fighting fierce battles against Hezbollah in the Qalamoun region have declared war against ISIS following weeks of tension.

“A decision has been taken by the factions working on the ground to uproot this ruinous group, as there is no longer any other choice,” the Army of Conquest-Qalamoun announced in its first official statement issued late Monday.

The group listed a litany of ISIS offenses that prompted the declaration, including the “harboring of corrupters,” confiscation of weapons from opposition fighters, attacks against rebel battalions, terrorizing of “the Muslims” and dismissing the authority of rebel sharia courts.

The armed opposition’s move against ISIS comes amid the recent surge in fighting along the rugged mountain region along Lebanon’s border as Hezbollah has sought to roll back rebel positions.

The Army of Conquest-Qalamoun, which seeks to replicate the success of similar coalitions in Idlib and southern Syria, announced its formation last week as rebels launched a preemptive campaign against Hezbollah in Assal al-Ward and Al-Jubbah across the border from Lebanon’s Tfail.

However, the Lebanese Shiite party repulsed the attacks and advanced in the region while the rebels said they had conducted a “tactical withdrawal” and were preparing a war of attrition.

The Army of Conquest-Qalamoun accused ISIS of cutting rebel supply lines in recent weeks by setting up a checkpoint in an area under their control, but did not specify the exact geographic location.

“[ISIS members] provoked the mujahedeen when they passed through the checkpoint, so they [the mujahedeen] were forced to [use a different] road to avoid fighting,” the statement said.

“[ISIS] quickly blocked [the new road] with earth [mounds], forcing the mujahedeen, once again, to use another road that was [in range of] enemy positions,” it added.

“They tried to arrest one of the mujahedeen at the checkpoint and that was the beginning of the first clash.”

“Subsequently they began to deploy on the mountain peaks that overlook the mujahedeen’s positions and open fire on them.”

The rebel coalition also said that, despite this hostility, as Hezbollah ramped up its campaign, some ISIS members arrived to give their support.

“[At first] they were detained and prevented from passing for fear of betrayal,” the statement read.

“When their good intentions became clear to the mujahedeen, official approval of their entry was granted […] and they occupied several watch posts.”

However, the statement added, ISIS quickly sent another group of fighters, who “deployed in the area, and took the leader of a [rebel] faction and some of his troops captive.”

“Then they began shouting [the slogans] ‘baqiyah!’ [ISIS will remain] and ‘we have come to slaughter you oh apostates’ on the roads and over the radio.”

“When the mujahedeen [arrived] to put an end to this farce one of the detainees [the ISIS members were holding] took advantage of the situation.”

“Seizing a weapon, he shot the driver, commandeered the car [he was in] and escaped.”

The official statement from the rebel coalition comes after the Nusra Front moved against ISIS along the western slopes of the Qalamoun, where Hezbollah has been pressing its advances against rebels.

Sources who spoke to the paper estimated that approximately 47 ISIS members were detained, including prominent ISIS commander Abu Abdullah al-Iraqi.

Abu Abdullah al-Iraqi and another ISIS commander, Abu Balqis al-Iraqi who was not arrested, are believed to be the group’s active leadership in the western Qalamoun area.

There have also been reports suggesting that the group’s “Sharia Emir,” Abu Baraa, has been detained.

As-Safir added that ISIS and Nusra Front had engaged in “wide clashes.”

A source close to Nusra told the daily that the “decision to wage war on [ISIS] is final and not limited to western Qalamoun, but also includes other regions regions such as eastern Qalamaoun, Wadi Barada and Zabadani.”

“The fighting will continue until [all ISIS members] are eradicated or declare their repentance and turn themselves in, so that ‘Hudud’ [Islamic punishment] can be implemented.
The source added that ISIS had been expelled from the Al-Jubbah and Ras al-Maara areas, where Hezbollah has been fighting Army of Conquest-Qalamoun rebels.

In recent days, Hezbollah has seized large swathes of the Al-Jubbah area near the Lebanese border and pressed an advance further northward towards Ras al-Maara.

Rebel fighters have already been engaged in fierce battles with ISIS on the eastern slopes of the Qalamoun mountains in recent weeks.

The Syrian Observatory for Human Rights reported Monday that “clashes raged between Islamists and other rebels on one hand and ISIS on the other in the outskirts of eastern Qalamoun near the Baghdad-Damascus international highway.”

The fighting comes after a number of rebel battalions – including the US-backed Authenticity and Development Front, the FSA-linked Ahmad Abdo Martyr Battalion and Jaysh Usud al-Shaqiyah, as well as Islamist groups Ahrar al-Sham and Army of Islam – announced the launch of an offensive against ISIS in the eastern Qalamoun in early April.

On April 5, the London-based daily Alaraby Aljadeed reported that rebels were seeking to open a strategic corridor between Qalamoun and the ISIS-controlled Deir Ezzor province in eastern Syria.

The opposition’s aims run directly against those of ISIS, which is seeking to control the supply lines stretching from Qalamoun to its strongholds in the east.

In late April, ISIS seized the Muhassa area, which lies at a strategic point between Damascus to the south, the Qalamoun mountains to the west and the Jordanian border to the southeast.

The ISIS victory in Muhassa threatens rebel plans to combat the militant organization in the eastern outskirts of the Qalamoun mountains as well as swathes of desert east of the capital.

By seizing the area, ISIS cut rebel supply lines stretching from the Jordanian border to the Syrian desert, where insurgents have fought back and forth battles against the militant group in recent weeks. The victory has also disrupted rebel lines linking eastern Qalamoun with Jordan.