You are here: Home / MidEastGulf / PYD: Turkey started a war against the Kurds under pretext of fighting Islamic State 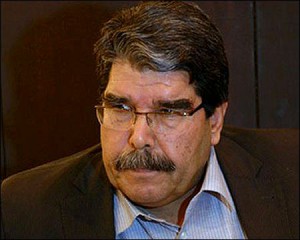 The Co-President of the Syrian Kurdish Democratic Union Party (PYD) Salih Muslim spoke to ANF regarding the war the Turkish state has started against Kurds under the pretext of fight against Islamic State group (IS).

Muslim remarked that Turkey actually waged a war against Kurds by pretending to be standing against IS and used IS as blackmail against Kurds. Muslim underlined that they would be resisting to all the policies Turkey would pursue against Syrian Kurdistan (Rojava) or the Kurds in Jarablus region.

‘Suruç massacre was carried out against kobani’

Pointing out that AKP and Erdoğan actually pursued a different plan against Kurds by claiming to be making peace since 2013, Muslim said creation of IS and having it fight the Kurds within this process was also a part of this plan. Muslim stressed that AKP indeed prepared for war by arguing to be making peace, adding; “Within this process which was called peace, they created IS and made it fight against Kurds. Although not directly, their indirect acts proved this to be true.”

Pointing out that Turkey was stuck in a difficult situation when the entire world started questioning who supported IS and provided a passage route for them, Muslim said; “Turkey would either stand by IS which it supported, or be on the side of those fighting IS. To smooth away the pressure it faced, it now wants to wage the actual war it had planned against Kurds by pretending to be standing against IS.”

Emphasizing that Turkey planned to combine the two processes it run with the PKK, and against Syria and Rojava, Muslim said that with its decision on IS, Turkey wanted to use IS as blackmail against the Kurds. Muslim said; “What Turkey implies to Kurds is that ‘Either you lay down arms or I sic IS on you’. Turkey has put this policy into practice with a massacre in Suruç.”

Muslim, according to whom Turkey has started a war against Kurds under the pretext of fight against IS due to international pressure, strongly criticized the airstrikes Turkey has recently launched against the guerrilla-held Medya Defense Zones. “They are shelling the guerrilla who waged a struggle and fight against IS in Shengal, Kirkuk and many other places, and stopped their advance in all these regions. What sort of an anti-IS fight is it then, now that Turkey is shelling those fighting IS? So, it means this is a war waged against Kurds from the front of IS.”

Muslim also stressed that Turkey’s policies were clearly seen by the entire world now, no matter how hard it tries to cover them, adding that the NATO member countries to gather today also knew very well against whom Turkey actually waged a war. He said both NATO and the whole world was much aware of the fact that YPG and YPJ is the only force fighting IS today.

Noting that the concept of the agreement the U.S. has made with Turkey was not known well to anyone yet, Muslim underlined that YPG and YPJ would be fighting against all probable dangers against Syrian Kurdistan and Kurds in other regions.

‘Peoples will decide whose rule they want’

Answering a question regarding the recently emerging plans in line with the agreement between the U.S. and Turkey, which is to clear the 40-km area in Jarablus region of IS and to leave it to FSA, Muslim said it is the peoples living in that region that will decide who will have the control over there.

PYD Co-President said that YPG and YPJ were not present in that region for now, but that some forces fighting IS were already there, adding; “The local people, Kurds and Arabs living there have long waged a war against IS and they cannot be ignored. It is yet no certain whether Turkey will take sides with those forces or hit them in the event of entering that area.”

‘YPG and YPJ are there to protect the people’

Calling attention to Turkey’s policy against Syria and Syrian Kurdistan, Muslim said nobody would allow Turkey’s attempts towards these regions, saying they knew very well that Turkey wanted to choke the Syrian Kurdistan Revolution by putting its long-existing plans into practice by means of the agreement it has made with the U.S.

Muslim emphasised that they would be standing against the attitude Turkey would develop against Kurds in Jarablus and other regions under the pretext of fight against IS, adding; “Everyone should know very well that YPG and YPJ are there to protect the people. We will be resisting to all the policies anticipating to leave some certain regions to IS or its brother organizations and target the Kurds. Just like they resisted to the regime and IS so far, YPG and YPJ will continue resisting to anyone targeting them.”