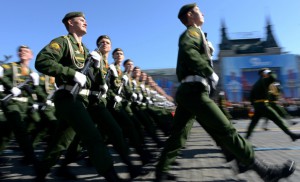 The New York Times praises the efficiency of Vladimir Putin’s military modernization on daily display over the skies of Syria. No big surprise here. The Soviet Union showed that a totalitarian state can concentrate its limited resources on the military, weak economy or not.

The Times article, however, misses the point that Putin’s modernization includes the substitution of a mercenary for a regular army, first in Ukraine and now in Syria. Societies of Mothers of Fallen Russian soldiers cannot now complain as they did for Afghanistan. Their sons made their own choices.

According to the most reliable intelligence estimates, rebel forces, more or less under Russian control, accounted for half of all troops fighting against Ukraine at the peak of regular-force activity. Russian regular forces used mercenaries as cannon fodder, and they sustained the greatest casualties. Throughout the Ukrainian campaign, the Kremlin claimed that all Russians fighting in eastern Ukraine were volunteers. Indeed, the majority either killed or missing in Ukraine have been “volunteers” recruited by shadowy organizations that transported them to Ukraine and brought their bodies back for secret burial. These shadowy organizations are gearing up for another campaign, only this time for Syria.

With Putin declaring peace in Ukraine and negotiating for a favorable political solution, Russian volunteers constitute a ready-made hybrid army available to conduct ground operations in Syria without risking regulars, who are already reluctant to serve in the Middle East.

The recruiting campaign for foreign legionnaires for the Syria operation is proceeding at top speed both within Russia and in Ukraine’s occupied Donbass. Russian websites like Dobrovolec.ru (volunteer.ru) — the “portal for volunteer saviors” — advertise for “volunteers” for the Syrian front. They feature heroic battlefield images of valiant Russians defeating the enemy. “Syria” is among the most popular search terms on Russia’s Facebook (vKontakte), yielding 1,161 potential recruiting sites. The most frequently asked questions are: how to get to Syria, what is the pay, and what are the selection criteria?

Recruiters do not hesitate to discuss their work with the press, although they must carefully choose their words. After all, Russia’s intervention in Syria has been publicly acknowledged and legitimized by the Assad government. In an interview with Lenta.ru, the recruiters insist they comply with Russia’s anti-mercenary laws because their recruits are “volunteers.” They explain that battlefield experience is most important and that they are looking for men in their mid-twenties and above. They do not want youngsters for the horrors of the Syrian field of battle.

The parallel recruiting campaign in east Ukraine is, by contrast, unfettered by the restrictions of Russian anti-mercenary laws. The website Donbass.UA shows a muscular T-shirt-clad young man, standing beside a tank, automatic rifle ready. It reads:

Even more explicit and revealing are the recruiting posters posted throughout the occupied parts of the Donetsk province. (Copies have been gathered by Ukrainian intelligence and shared with allies. We cannot vouch for their authenticity). One is entitled:

Why it is better to fight in Syria.

Consequences — Syria: respect for the war and its heroes. Donbass: Criminal prosecution

In a further twist to Putin’s foreign legion operation, Fox News reports that a leading Cuban general and Cuban military specialists and special forces trained in Russia have been spotted in Syria. These images remind one of the Cold War days in which Cubans served as Soviet proxies in Africa. The main difference is that Cuba has gained official recognition by the United States, supposedly to discourage such activity.

The transfer of mercenaries to Syria is a rare bit of good news for Ukraine. There had been fears that the Russian military would turn the mercenaries into a disciplined fighting force that could take on the Ukrainian army without Russian assistance. The bad news is that Putin’s foreign legion might become a quick response battalion that could be shipped back to Ukraine on short notice.

For Putin, the foreign legion, particularly bolstered by Cuban professionals, means that he can use proxy fighters to fight ground wars in place of young Russians, who have no desire to die in a faraway land that has no real meaning for them. An added advantage is that he transfers a highly armed team of thugs away from the porous Russian border. There’s no telling what kind of mischief they could cause on Russian soil. Let’s see how this works out for him.