You are here: Home / West Asia / Putin warns of incursion from Afghanistan into Central Asia 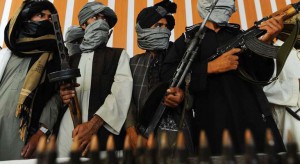 Putin’s statement comes a day after U.S. President Barack Obama announced plans to keep about 9,800 U.S. troops in place in Afghanistan through most of next year to continue counterterrorism missions and advise Afghans battling a resurgent Taliban.

Speaking at a summit in Kazakhstan of the heads of former Soviet republics Putin said the situation in Afghanistan is “close to critical” and called on his counterparts to be prepared to act together to repel a possible attack.

“Terrorists of all kinds are getting more clout and do not hide their plans of further expansion,” Putin said in televised remarks. “One of their goals is to push into the Central Asian region. It’s important that we are prepared to react to this scenario together.”

Afghanistan shares a porous border with Turkmenistan, Uzbekistan and Tajikistan, which has been a source of drugs coming into Russia and is a long-standing worry of Moscow’s.

Putin reiterated Russia’s concerns about Russian nationals fighting for the Islamic State group in Syria, saying that he “cannot allow them to use the experience they have just gained in Syria to use back home.”

Russia earlier this month launched its first airstrike on Syria, which Moscow said was to support the offensive of Syrian government troops against the militants.