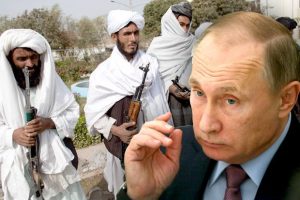 There is a need to evaluate Russia’s claim that it went to Syria to fight terrorism instead of fighting it on Russian territories. This claim should be placed side by side with Russia’s insistence that most of Syria’s armed opposition are terrorists, like reported by mebriefing.com.

This need to assess the truthfulness of both claims stem from the fact that when Russia’s motives for moving outside of its borders are debated, there is a tendency to separate those motives from any overarching geopolitical project in Moscow and to search for them within the location that Russia decided to move into. Those who look at Russia’s moves apart from a specific Russian geostrategic project grasp for explanation of each move on its own merits, not as connected to an overall strategy.
So, did Russia go to Syria for its own direct security? Or did it go as an integral part of a greater game?

So long as the debate remains within its immediate focus-Syria in this case- it can go for long time without settling this matter in any definitive way. It requires knowing exactly what is going on in each group of the armed opposition that Russia opposes. Many of those groups’ fighters died fighting ISIL, and many showed no sign whatsoever that they have a global agenda. But this was not enough to convince Moscow that they do not represent any threat to its security. Several counter-arguments were raised by Russia, or its mouth pieces, showing the opposite.

The only way to settle this issue is to free the debate from its direct focus-that is to say to move it out of Syria to, say, Afghanistan. This country is closer to Russian territories. It has all kinds of terrorists with the Taliban on top. It must represent a threat to Russian security-that is if we assume that Moscow’s claims regarding Syria are truthful.

Then, the question turns to be: What did Russia do in Afghanistan to “fight terrorism in far lands in order to avoid fighting it in Russia”? If going to Syria was not meant as an anti-Western geopolitical move into the Middle East, then Russia indeed went to fight terror there.

But not only does Russia skip fighting terrorism in Afghanistan, it actually provides Taliban with arms and money. And the objective is pure and simple: Get the Americans out of there.

Then, quick and apologetic excuses follow. “The Taliban is not homogenous. Within the Taliban, there are different wings with almost different ideological backgrounds. But the bulk, main leadership, current leadership, and the majority of Taliban now became a local force. They gave up the global jihadism idea”, Kabulov added. But all the Syrian opposition, except for Nusra and the Syrian wing of ISIL, have no global Jihadism idea. Ahrar Al Sham, for one example, never said it has a shred of global aspirations. Why did Russia consider them terrorists when it is arming Taliban?

Then, compare this answer with what Iran’s Supreme Leader Ayatollah Khamenei said just few day after Kabulov straight forward statement. “The Persian Gulf is the Iranian nation’s home and it, plus a large section of the Sea of Oman, belong to this powerful nation; therefore, we should be present in the region, hold wargames and display our power. It is the Americans who should say why they have come from that side of the world and stage drills here. What are you doing here? Go back to the Bay of Pigs. Go and hold exercises there. What are you doing in the Persian Gulf? The Persian Gulf is our home”, Khamenei said March 4 this year. Almost identical, but in different places.

On March 29, Army Gen. Joseph Votel told Congress that Russia is providing support to the Taliban in Afghanistan in an effort to undermine US. Moreover, Taliban does not even deny it receives assistance from Russia. “We had a common enemy. We needed support to get rid of the United States and its allies in Afghanistan and Russia wanted all foreign troops to leave Afghanistan as quickly as possible. Their sole purpose was to strengthen us against the U.S. and its allies”, an official in the group said.

Furthermore, the UK Sunday Times reported that a meeting was held between the former leader of the Taliban and Russian President Vladimir Putin in September 2015 for the purpose of collaboration.
Kabulov explained what Moscow wants. “We expect that Donald Trump will tailor a new American approach to Afghanistan and he should address several issues which are a matter of concern not only to Russia, but important regional actors, like China, Iran, Pakistan, and others. At the end of its failure, why does the United States want land bases in Afghanistan? We don’t have a clear-cut answer. Having this infrastructure as a basis, America will need two to four weeks to redeploy up to 100,000 soldiers on the same bases”, he said.

If the idea to strengthen Russian-Taliban ties is that Taliban fights ISIL, it still does not stand on strong ground. Some Taliban local groups have good ties with ISIL. And what does US bases have to do with that? And who knows, maybe we will hear one day that Russian forces went to Ukraine to fight ISIL there as well. And worse, some people will parrot this without thinking.

In fact, Taliban itself dismisses the Russian claim that it is fighting ISIL. A Taliban official told Reuters on December 8 of last year, “In early 2008, when Russia began supporting us, ISIS(Islamic State) didn’t even exist anywhere in the world. Their sole purpose was to strengthen us against the U.S. and its allies”. That was echoed by Taliban spokesman Zabihullah Mujahid, who said “ISIS is not an issue”.

Moreover, the Taliban cannot eliminate ISIS by themselves. In fact, a majority of the ISIS fighters in Afghanistan were Taliban members in the past; more Russian-backed Taliban might join the Islamic State later. Hence, Russian support to the Taliban will only strengthen ISIL.

We have no doubt in our minds that Russia’s involvement with Taliban has many objectives, among them is serving Russia’s oil and gas plans in Central and South Asia. It is a replay of Chevron’s failed attempt of the late 90’s, but on the other side of the fence.