You are here: Home / Europe / Putin on Alert against terror in Security Anniversary 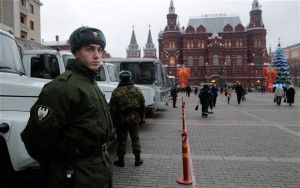 President Vladimir Putin asserted today that the terrorist plans and actions are a direct threats for Russia, referring to the 95 anniversary of the Security Service, which is commemorated today.

Putin stressed that the international situation is difficult because of growing tensions in the Middle East and other parts of the world, speaking to officers and veterans on the occasion of Labor Day of such armed bodies.

Putin recalled that terrorism declared open war on civilization and the world community, before representatives of the Federal Security Service (FSB in Russian), the Foreign Intelligence, the Federal Guard (Coast Guard) and the Main Department of Special Programs.

Noting that this year the FSB forces detected and thwarted more than 30 terrorist plots, the President instructed them to remain highly concentrated and mobilized and implement all measures of war against this scourge.

He particularly urged to pay special attention to the neutralization of recruiters and terrorists’ emissaries.

He recalled that the intelligence services of several countries intensify their activities and operations within the Eurasian state, and as proof stated forward that in 2015 the Russian counterintelligence officers unmasked more than 320 foreign officers and agents and their accomplices.

I have no doubt that Russian security services are ready to respond adequately to these challenges, noted the head of the Kremlin.

I also hope, he added, they will actively act in areas such as protection of state borders, the fight against corruption and economic crimes, stressed the president.

Regarding the Foreign Intelligence Service he said that it faces a difficult task because it is important to quickly reveal all external threats to Russia’s security, make an exhaustive analysis and report on time all the possible scenarios of regional conflicts.