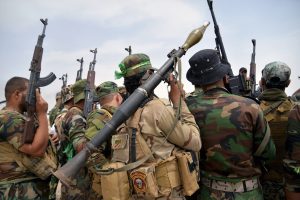 “The situation in Afghanistan is not easy,” Putin said during a video conference with security service chiefs of ex-Soviet states, AFP reported.

“Militants from Iraq, Syria with experience in military operations are actively being drawn there,” he said.

“It is possible that terrorists may try to destabilise the situation in neighbouring states,” he added, warning that they could even try “direct expansion”.
Putin has repeatedly warned about members of extremist groups exploiting political turmoil in Afghanistan to cross into neighbouring ex-Soviet countries as refugees.

While Moscow has been cautiously optimistic about the new Islamic Emirate of Afghanistan (IEA) leadership in Kabul, the Kremlin is concerned about instability spilling over into Central Asia where it houses military bases.

In the wake of the IEA takeover, Russia held military drills with ex-Soviet Tajikistan — where it operates a military base — and in Uzbekistan. Both countries share a border with Afghanistan.

Tajikistan’s national security chief, Saimumin Yatimov, for his part told the video conference that he had registered an “intensification” of attempts to “smuggle drugs, weapons, ammunition” from Afghanistan into his country.

Afghanistan has long been the world’s largest producer of opium and heroin.

Last week the Kremlin’s envoy to Afghanistan, Zamir Kabulov, said Russia will invite the IEA to Moscow for international talks on Afghanistan scheduled for October 20.