You are here: Home / Senza categoria / Psychology of suicide bombers: inside the kamikaze mind

Researchers across the globe are trying to understand what drives the sense of martyrdom to which terrorists aspire. Complicating the explanations is the fact that these killers have a wide range of psychological profiles. 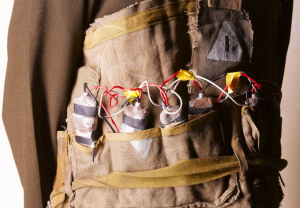 “They detonated.” This expression is being used increasingly in newspapers and on television to describe the acts of suicide killers. What happens in the minds of these people who wrap themselves in explosive belts to shed as much blood as possible? What drives these young people born in France to commit such criminal offenses before killing themselves? Since the 1981 suicide attack against the Iraq embassy in Beirut (61 dead), which marked the beginning of a series of suicide operations, battalions of researchers around the world have been trying to understand what drives these self-destructive terrorists.

In France, the journal Etudes sur la mort (Studies on death) dedicated an entire issue to the subject. Italian psychiatrist Antonio Preti explains that “suicide with hostile intent” has a long history. It’s a form of immolation in which the suicide attacker destroys those he deems responsible for his decline. It’s the only way he can find to take revenge. It’s the violence of a desperate man.

In the Bible, a chained Samson kills himself by destroying the palace of the Philistines, which crushes him. During the occupation of Galilee (66-70 A.D.), the Jewish Sicarii stabbed the Romans on the street, at the risk of being killed. Some historians consider them the first political “terrorists.” In 1945, when the war was being lost, Japanese kamikaze crashed onto American ships. A similar figure was Mohamed Merah, who carried out three gun attacks targeting French soldiers and Jewish civilians in March 2012, killing seven people before being killed by French police. He presented himself as a “mujahideen” enrolled in a holy war and answered French negotiators by saying, “You have in front of you a man who does not fear death. I love death like you love life.”

Where does their passion for death come from? Why do they choose to murder civilians while at the same time sacrificing themselves? Marie-Frédérique Bacqué, the editor of the magazine that dedicated an issue to the topic and a psychopathology professor at Louis Pasteur University in Strasbourg, believes there’s no specific “personality structure” for suicide killers, who have a wide range of psychological profiles.

“It would be reassuring to note that kamikaze acts are the result of a historical context on specific minds — ill minds, madmen pushed towards massacre by murderous folly,” she explains. “But we are forced to admit that it’s not the case.”

Terrorists aren’t psychopaths, they are conscious killers. And “normal.” Just like the Nuremberg trials resulted in Hannah Arendt’s conclusion that simple normality could lead an individual to perpetrate genocide, we are forced to recognize that those who carry bombs and hijack planes are mostly “normal” people.

A psychological profile can’t explain suicidal killers, but can sociology and anthropology help us? Anthropologist Scott Atran, who has met ISIS fighters and young European jihadists, has a few explanations. In the anxious address he delivered at the United Nations Security Council on April 23, 2015, he mentioned the “dark side of globalization.” A handful of young Europeans who are “humiliated” by the way they and their parents are treated. They feel rejected as Muslims and no longer consider themselves “French or Arab,” and start rejecting the norms and values of society as they “struggle with a search for social identity,” he says. They become radicalized, look for other forms of action and existence “that bring them meaning and glory.”

But this “breeding ground” explanation doesn’t explain why young French men, armed with assault rifles, killed unarmed fellow citizens attending a concert, to specify one of the attacks. It has even triggered outraged criticism. At the French National Assembly on Nov. 25, French Prime Minister Manuel Valls got carried away: “No excuse should be looked for,” he said. “No social, sociological or cultural excuse.” But Atran isn’t so much looking for excuses as trying to understand. Citing Irish philosopher Edmund Burke, he also says some people are fascinated by terror. “Human beings can experience a particular feeling of delight when faced with terror, because they see it as the manifestation of superior, limitless and inexplicable forces, close to the terror of God,” he says.

Young killers are fascinated by the potential to stun, because it provides them with a tremendous “sense of power,” the anthropologist says. It’s the kind of fear that terrorists spread, that terror in the face of death that they themselves defy — sometimes taking amphetamines to make committing their crimes easier — that fascinates them. All the while they know they are guaranteed media coverage. “What inspires them at the highest point isn’t so much the Koran or religious teachings, but mostly an exciting cause and a call for action that promises glory,” Atran says.

Activist nihilism like what Russian terrorist Sergey Nechayev supported has historically fascinated young generations looking to make a statement. That’s where we are today, and Atran isn’t the only person to say so. In a Le Monde article published on Nov. 24, political specialist Olivier Roy also talks about “generational nihilism,” comparing today’s terrorists to the 1970’s Marxist-inspired movements: “They choose Islam because it’s the only thing available on the market for those in search of a radical uprising,” he writes. “To join ISIS is to be certain to be able to fulfill the desire to terrorize.”

But many specialists of the Muslim world believe the nihilism analysis neglects the religious, fanatical and sectarian dimensions of these crimes. Antony Samrani, a journalist from the Lebanese daily L’Orient-Le Jour, agrees that the “spectacular and deadly” force of such attacks “appeals to young people eager for violence,” but he also describes a new religious “martyrology.”

Research on jihadist literature, websites and Facebook pages has revealed that the perpetrators of the suicide attacks saw themselves as martyrs — like Chérif Kouachi, who declared himself a “defender of the Prophet.” At the Bataclan concert venue, the killers shouted that they were “soldiers of the Caliphate” coming to avenge “the women and children of Syria.”

With the war in Syria, an international “jihadosphere” emerged, reinforced by social networks. It claims to return to a literal, early, combative Islam, that glorifyies the “lions of Islam,” whether it’s Hamza, Muhammad’s paternel uncle, the first Muslim martyr, or Osama “the lion” bin Laden.

This grandiloquent propaganda eventually gained followers. Under the picture of a large lion, the forbidden French jihadist website Ansar Al-Ghuraba writes, “We live like lions, we die like lions.” Abou Mariam, a 24-year-old French jihadist from Toulouse who is now in Syria, told Syrian journalist Loubna Mrie that “martyrdom is probably the shortest path to paradise, and that’s not something I was taught. I saw it directly in my martyr brothers. On their faces, I saw bliss, I smelled the scent of musk coming from their dead bodies.” He added, “The only thing we lack to reach paradise is death.”

Such determination to die as martyrs, by killing “infidels,” is the result of the “radical indoctrination techniques used by sectarian drifts,” explains Dounia Bouzar from the Prevention Center Against Sectarian Drifts Linked To Islam (CPDSI). It’s a new form of religious indoctrination, connecting emotional propaganda to fundamentalist preachers, and we are only just beginning to fight it.