You are here: Home / MidEastGulf / Psychological warfare in Iraq 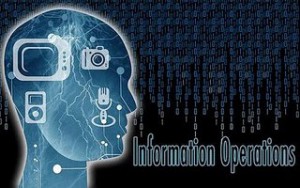 When the Islamic State (IS) captured Mosul in June of 2014, the event brought to the fore the power of the extremist group’s propaganda machine and how it had paved the way for its lightning advance across northern Iraq and its capture of the city, which took place seemingly overnight.
One of the most surprising things at the time was the feeble way the Iraqi Army had reacted to the onslaught. It was said back then, and widely circulated, that all it took to erode the morale of Iraqi soldiers and make them flee their posts so readily was receiving text messages on their cell phones from colleagues warning them that fighters from IS were approaching.
Since then the Iraqi government has been attempting to return morale and prestige to its armed forces, who were left humiliated and marginalized by this traumatic experience. Perhaps even more traumatizing was the event that has subsequently become known as the Camp Speicher Massacre, when it is estimated IS militants killed more than 1,000 Iraqi air cadets in June of 2014 when they captured Tikrit, where the training facility is situated.
Over the following months it did not seem like the Iraqi government was serious about rehabilitating the image of its beleaguered armed forces, instead seemingly satisfied with relying on the military efforts and strategies of Iran’s Gen. Qassem Suleimani, the commander of the Quds Force, a feared division of the Islamic Revolutionary Guard Corps.

It was Suleimani who led the Iraqi Shiite volunteer forces who were spearheading the fight against IS in Iraq — and given free rein by Baghdad to operate parallel to the country’s army. And it was these volunteer forces, known as the Popular Mobilization Forces, who were able to retake the city of Tikrit back from IS about a month ago. At the present time, plans are under way to retake the western Anbar province, large parts of which, including the provincial capital Ramadi, are under IS’ control, with the Tikrit offensive forming a benchmark on which the current plans are being modeled.
At the same time, reports have spread like wildfire regarding IS’ “victories” over the Iraqi Army, with the atmosphere of fear leading countless people to flee their homes in sheer panic. The Iraqi government, meanwhile, has attempted to deny the reports of the continued spread of the extremist group and its alleged massacres of Iraqi soldiers, branding these reports as mere psychological warfare. I have no doubt that much of what is being circulated is in fact subterfuge, but it is also clearly based on a modicum of truth.
What we have now in Iraq is a situation fueled by propaganda and counter-propaganda, all being exchanged in rapid-fire succession before a single Iraqi army bullet has even been fired in Anbar. What is doubly more dangerous is that all the misleading publicity campaigns and psychological warfare conducted by either side in this conflict are occurring in a country and within a context that provides a fertile breeding ground for incitement and provocation that can take many dangerous forms. Moreover, the Tikrit offensive has now cast a dark and foreboding shadow over what is about to happen in Anbar.

Many reports, which included photographic and video evidence as well as eyewitness testimony, showed that following their victory in Tikrit, the Shiite Popular Mobilization forces engaged in what can only be described as acts of sectarian-fueled revenge over the city’s Sunni inhabitants. These human rights abuses are reported to have included mass killings as well as the ransacking and burning of homes.
The operation in Tikrit was certainly necessary; more of the IS-occupied territories in Iraq need to be taken back from the extremist group, a point on which there is broad consensus. However, the transgressions by the Popular Mobilization forces following their victory in Tikrit have now worked in IS’ favor.

As part of its own propaganda efforts in the battle for the “hearts and minds” of Iraqis, it is now making reference to these actions by the Shiite militias in a bid to drum up support for itself from Anbar’s majority-Sunni population. These are efforts, which could find some success in a restive region of the country that has felt marginalized ever since the US-led invasion in 2003. After all, IS, whose propaganda machine is already predicting a failure for Iraqi forces in the upcoming battle for Anbar, did not just fall out of the sky. Its emergence and dominion over large parts of Iraq is but a symptom of accumulated mistakes made over the previous decades, all representing shameful episodes for the country.
So, going hand-in-hand with the preparations for the impending Anbar offensive is a psychological battle being fought out by individual media outlets, a battle which can distort and exaggerate the current atmosphere for the benefit of the respective protagonists in the conflict.
It is now no longer possible to enter into a military conflict without prefacing it with this kind of psychological warfare conducted against the enemy. IS were trailblazers in this regard, but the Popular Mobilization has proved an apt pupil and quick study: The student is attempting to surpass the master.