You are here: Home / Mediterranean / Protesters rally in Tunis against return of Tunisian Islamic terrorists from hot spots 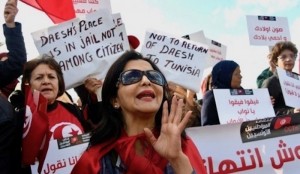 Several citizens, independent and civil society representatives rallied, Sunday morning, outside the Tunis Municipal Theatre to reaffirm their “outright opposition” to the return of Tunisian terrorists from areas of tension, like reported by tap.info.tn .

Under the banner “No to terrorists among us”, the protest was organised by the “Tamarrod” movement, the Union of Independents, the “Al-Bedira” movement and the “SOS Terrorism” association.

Protesters expressed serious concern about the fate of Tunisia, after it began to put an end to terrorism.

In this regard, they called on the government and all the state institutions to assume their responsibility in the fight against this threat and the identification of the real responsibility for funding, enrollment, training and sending young Tunisians to fight in areas of tension.

While demanding a rigorous application of the anti-terrorism law, they also urged the amendment of laws that oppose the best interests of the homeland.

Houssem El-Hammi, a member of the rally’s organising committee said the government is not serious about dealing with terrorists, especially Tunisians returning from hot spots.

“The government must treat this issue with more seriousness and rigour to better reassure Tunisians about the fate of Tunisia,” he said.

In this regard, he called for a rapid restoration of diplomatic relations with Syria for better Tunisian-Syrian coordination in terms of intelligence and security.

He also expressed his fears that these Tunisian terrorists would enter the country illegally by land and carry out terrorist attacks.

Present at this rally, media executive Taher Ben Hassine considered it essential to multiply such protests to bar the way to any attempt to vindicate these terrorists.

In this regard, he proposed staging a rally against the return of these terrorists, once a week, to raise public awareness of the scale of this threat.