You are here: Home / MidEastGulf / Prospects for a Turkish Incursion into Syria 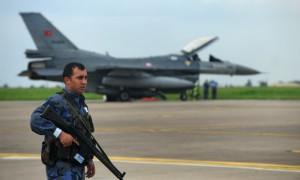 Recent gains by the Assad regime in its ongoing northern offensive — in particular, the recapture of the Shiite towns of Nubl and Zahra — pose a significant geostrategic threat to Turkey and the opposition groups based in and around Azaz. The regime and its allies are now in a favorable position to cut the lines of communication between the Turkish border areas and the rebel-held city of Aleppo. Such an outcome now seems inevitable given major Russian and Iranian support for regime forces. As a matter of fact, the regime, backed by the Russian air-ground campaign, has been successfully advancing towards the Turkish frontier areas at the time of writing. In this regard, it should be noted that the Russian air force detachment in Syria enjoys high sortie rates as a result of Hmeymim Airbase’s proximity and an effective sortie-to-strike ratio stemming from good intelligence preparation of the battlefield (IPB). An expansion of Russian military advisors on the ground has enabled efficient coordination between close air support platforms and advancing Syrian Arab Army units, while the elite Iranian Quds Forces and Lebanese Hezbollah drive forward fueled by sectarianism and experience in hybrid conflicts.

More alarmingly, Ankara may soon face a menacing combination of hostile forces along its southern borders: Kurdistan Workers’ Party (PKK)-affiliated YPG forces, the self-proclaimed Islamic State, and the Syrian Arab Army. The only Ankara-friendly groups near the Turkish border would be the rebel fighters in Idlib province, who would be surrounded by Latakia in the south and Aleppo in the northeast.

Under these tense circumstances, Russia accused Turkey of preparing for a military incursion into Syria. In response — having already drawn attention to Russian “crimes” in Syria — Ankara firmly stated that it had the right to take necessary measures for its national security. This rhetorical exchange raised eyebrows about prospects of a possible Turkish incursion into Syria. Yet while a limited Turkish intervention in Syria might seem likely, Russian presence in Syria remains a highly complicating and dissuasive factor.

Ankara closely monitors the battle around Aleppo, as developments in that theater could lead to irrevocable setbacks for Turkey’s position in Syria. At the time of writing, sources on the ground reported that the Syrian Arab Army had advanced to within 10 kilometers of Tal Rifaat, the last defensive line for pro-Turkey armed opposition before the border city of Azaz. Furthermore, experience suggests that the fall of Aleppo could trigger a massive influx of refugees into Turkey, which is already hosting close to 2 million Syrians. Notably, even the regime’s march towards the northern frontier areas has led to a new surge of refugees at the Turkish border. The heightened usage of unguided munitions in Russian and Syrian airstrikes ensures high civilian casualties and contributes to greater refugee flows.

In strictly operational terms, Turkey possesses the ability to launch a limited incursion and create a small safe haven on its border. Deployed along the southeastern border areas, the Turkish 2nd Army has long been at the epicenter of Turkish defense modernization. The 2nd Army’s 5th Armored Brigade in Gaziantep and the 20th Armored Brigade in Sanliurfa have been reinforced since the outset of the Syrian civil war and currently enjoy high combat readiness — both could serve ably as principal maneuver units in any limited incursion. Battalion-level detachments from the army’s fully professional commando brigades have been deployed in support of these armored brigades. The Turkish armed forces have also deployed robust artillery forces along the border, predominantly equipped with 155mm Firtina howitzers with a 30 to 40 kilometer range. Finally, the Turkish air force operates airbases in close proximity to the Syrian border, allowing it to generate long on-station times and high sortie rates.

The Russian military deployment presents the most significant challenge to a Turkish incursion into Syria. Any Turkish ground incursion would require close air support from Turkish army aviation attack helicopters and air interdiction operations flown by the Turkish air force. Though air superiority would not be a prerequisite for operating Turkish rotary and fixed wing assets in Syrian territory, the Turkish air force would have to deny air superiority to the Russian air force, at the very least.

The operational necessity of denying Russian air superiority could lead to direct Turkish–Russian air-to-air clashes. Problematically, the Russian air force detachment in Syria is now much stronger than it was in November 2015, when a Russian Su-24 was downed by the Turkish air force for violating Turkish airspace. The Kremlin responded to that Turkish move with further escalation: Russia deployed S-400 long-range air and missile defense systems, additional Su-34 strike fighters, and extremely capable Su-35S air superiority fighters. Currently, over 20 air superiority “Flankers”(SU-27SM3, Su-30SM, and Su-35S) and air-to-air capable Su-34 Fullbacks pose a deterrent threat to any Turkish operations within Syrian airspace. Furthermore, the Russian air wing in Syria now operates under a robust, layered air defense umbrella provided by deployed S-400s, SA-17s, and SA-22s coupled with advanced electronic warfare capabilities, such as the recently spotted Krasukha-4 that could blind Turkish command and control systems and aircraft.

In the absence of air superiority, Turkish maneuver units would face significant challenges in an extremely hostile environment that could result in high casualties. If Turkey opts to reduce risk for its ground forces by denying Russian air superiority, the situation could escalate dangerously. The Turkish air force’s 151st Squadron in Merzifon is assigned to the suppression of enemy air defenses (SEAD) duties with its AGM-88 high-speed anti-radiation missiles (HARM) that could be effective against some Russian air defenses and ground-based electronic warfare assets. Yet the Russian anti-access/area-denial (A2/AD) bubble in Syria and the eastern Mediterranean penetrates several hundred kilometers into Turkish territory, holding all Turkish combat air patrols (CAPs) at risk. Further, open-source intelligence suggests a significant shift in the payload configurations of Russian aircraft in Syria. Russian strike packages are now flying with more escort aircraft and an increased number of air-to-air missiles. In a confrontation, beyond visual range (BVR) combat with AIM-120C and AA-10 or AA-12 missiles would be the determining factor, though Russian air superiority fighters could certainly seek to exploit their kinematic advantages by seeking within visual range (WVR) combat.

Even more importantly, the risk of a Turkish–Russian escalation inevitably brings NATO into the picture. If Ankara acts unilaterally by opening an out-of-area front in Syria, this likely would not be subject to the Article V umbrella, unless Russia then attacked Turkish territory. As such, the Turkish–Russian military balance in a prolonged conflict would become a matter of true concern. Ankara likely cannot rely upon any tangible support from its NATO allies that it could interpret as encouragement for even a limited incursion into Syria. Although the Turkish elite could still opt for cooperating with the Gulf Cooperation Council (GCC) states, some of which openly voiced interest in a ground deployment to Syria, such a ”coalition of the willing” would offer no tangible and deterrent protection to Turkey as NATO would.

Beyond the challenges posed by the Russian contingent in Syria and a lack of political-military support from NATO allies, Turkey’s internal terrorism problem continues to devolve. The PKK terrorist network has altered its tactics, techniques, and procedures in recent years. The PKK now pursues an urban warfare-driven operational approach to the decades-long low-intensity conflict through intensive use of improvised explosive devices, barricades, and snipers to create dangerous kill zones. The PKK is even employing some “mercenary” foreign snipers, based on recent captures by the Turkish security forces. At the time of writing, Turkish security forces still run counter-terrorism missions under urban warfare conditions, particularly in the southeastern districts of Sur in Diyarbakir and Cizre in Sirnak. Under the problematic internal security situation, launching a land incursion into Syria, especially into Syrian Kurd-dominated areas, would be highly risky.

In sum, Turkey seems to be caught between geostrategic necessities of launching a limited incursion and the twin risks of an uncontrollable escalation with Russia and the domestic terrorist threat. In the absence of robust support by its NATO allies, Ankara’s decision will depend on the volatile political-military calculus in Syria and the trajectory of the ongoing northern offensive.

Without a doubt, any land incursion would significantly differ from the Turkish cross-border military operations into northern Iraq in the 1990s. In Syria, the Turkish air force would have to operate in contested airspace and the Turkish army would have to confront hybrid threats. The campaign would require planning to overcome the Russian A2/AD systems and hold ground defensively instead of repelling hostile groups for a limited time.

Finally, predicting Russia’s possible moves will remain a great concern in Ankara. The Kremlin’s intentions for further escalation or even primitive revenge should be taken into consideration. Yet an over-cautious approach could end with the complete exclusion of Turkey from the Syrian chessboard. Ankara is stuck at the crossroads as it considers how to make its most critical political-military calculation in Syria yet.