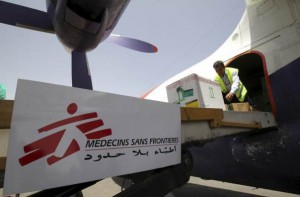 A “projectile” struck a clinic supported by international medical group Medecins Sans Frontieres in north Yemen on Sunday, killing four people, MSF said, another in a series of attacks on its facilities in the war-torn country.

MSF said it was not clear who was behind the attack that also wounded 10 other people in Shiara Hospital in the Razeh district, where the group has worked since November last year.

In a statement on its Twitter account, MSF did not identify who was killed in the attack but said that three of the wounded were staff members, of whom two were in critical condition.

“This is the third severe incident in the last 3 months. Our teams struggle on a daily basis to ensure the respect of health facilities,” MSF wrote. An earlier tweet by the group described the projectile as a rocket.

Regional MSF operations chief Raquel Ayora said all warring parties are regularly informed of the GPS coordinates of the medical sites where the group works, and that MSF was in constant dialogue with them.

“There is no way that anyone with the capacity to carry out an air strike or launch a rocket would not have known that the Shiara Hospital was a functioning health facility providing critical services and supported by MSF,” she said.

A military coalition led by Saudi Arabia has been fighting the Iran-allied Houthi group in Yemen, a campaign Riyadh says is aimed at repelling at what it sees as creeping Iranian influence in the Arabian Peninsula region.

Nearly 6,000 people have been killed since the Saudi coalition entered Yemen’s conflict in March, almost half of them civilians. The war has exacerbated hunger and disease in Yemen, the region’s poorest country.

In a separate incident, an intelligence colonel was killed in a drive-by shooting in Yemen’s southern port city of Aden on Sunday, a security official source said, in an attack claimed by Islamic State militants.

It was the latest in a series of assassination and bombings by militants belonging to the Yemen branch of the ultra-violent group which have undermined security in Aden, the temporary capital of the embattled Yemeni central government.