You are here: Home / MidEastGulf / Progress on the ground refocuses fight against ISIS online 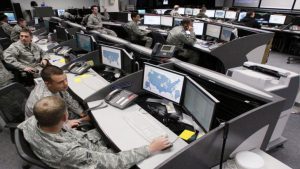 As the Islamic State (IS) steadily loses ground in Iraq and Syria, the US military is targeting online operatives one-by-one, like reported by kurdistan24.net.

The group is more and more relying on headline-grabbing attacks to maintain its image to make up for losing most of its territory in the last eight months.

IS operatives who use social media, encrypted messaging and other online tools to reach people overseas are an increasing target for the anti-IS coalition as they inspire and encourage attacks.

Seven months earlier, Abu Mohamed Furqan, who oversaw the production of propaganda videos and created the group’s monthly online magazine Rumiyah, was also killed by a drone strike in Raqqa, its self-declared capital in Syria.

According to US officials, a team of US commandos called the expeditionary targeting force, has killed more than a dozen suspected planners since the summer of 2016.

Gen. Joseph Votel, head of US Central Command, reaffirmed however that the loss of territory does not mean the Islamic State is on the verge of collapse.

“The group will continue to coordinate and inspire attacks from its online virtual caliphate,” he said in an email interview with the LA Times.

“The military defeat of ISIS is essential but not sufficient,” he noted. “As we continue to degrade ISIS’ physical capability, they will shift more of their attention to the virtual realm, and we will need to do whatever we can to stay ahead of them.”

“Islamic State’s propaganda will assuredly outlive their physical caliphate,” said Charlie Winter, a research fellow at King’s College in London. “This resilience means their ability to inspire terrorist attacks will also live on.”

The European Union’s police agency, known as Europol, also discovered that IS developed its own social media platform to avoid detection.

Europe is facing “the highest terrorist threat for a generation,” warned the head of Europol Rob Wainwright.

Previously, Masrour Barzani, the Chancellor of the Kurdistan Region Security Council (KRSC), warned the battle with IS will become a war of ideas as foreign fighters quit the group.

“The nature of the fight against [IS] will change into an intelligence war,” the KRSC Chancellor said, stating the large number of foreign fighters deserting the Islamic State pose a threat to the security of their countries of origin.

The State Department issued a travel alert on May 2 for all of Europe because of the threat of terrorist attacks on the continent.