You are here: Home / MidEastGulf / Pro-regime militias in Syria 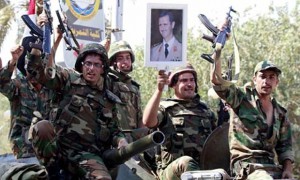 Pro-regime militias formed since the Syria conflict began in 2011 have between 150,000 and 200,000 members, military and security sources say.

Created in 2012, the National Defence Forces comprises some 90,000 fighters from all religious confessions dispersed across Syria under the command of Brigadier General Hawash Mohammed.

– “Kataeb al-Baath” (The Baath Phalange, named after the ruling Baath party): headed by Hilal Hilal, this militia of 10,000 men is present in the northern city of Aleppo and in Damascus.

– “Suqur al-Sahraa” (The Desert Falcons): its 7,000 men are trained by Iranian officers and fight in the desert region in eastern Homs province against the Islamic State group (IS). They specialise in ambushes.

– “Jaysh al-Wafaa” (The Army of Loyalty): since 2014, this militia has enrolled dozens of former rebels from the Eastern Ghouta region east of Damascus.

– “Dareh al-Sahel” (Shield of the Coast): made up of hundreds of militiamen mostly from the Alawite community from which President Bashar al-Assad hails, it fights in Latakia province.

– The Syrian Resistance Group: fights in Latakia province, under the command of local leader Ali Kayali.

– “Al-Hosn” (The Fort): a security company of 6,000 men founded by businessman Rami Makhlouf, a cousin of Assad. Has fought in Damascus and Latakia.

– “Sotoro“: a Christian group of 500 fighters in Hasakeh province in the northeast.    – “Al-Maghawir” (The Commandos): a force of hundreds of members from tribes in the Badiya desert region. Funded by Iran.

– The Shaitat tribe militiamen (also known as “Ussud al-Sharqiya“, or Lions of the East): in the eastern province of Deir Ezzor, it has between 700 and 900 fighters. In 2014, IS killed more than 900 members of the Shaitat tribe.

– Iranian Revolutionary Guards: at least 7,000 fighters have been deployed in Aleppo province. They are sent to Syria for short periods under a rotation system.

– Lebanese Hezbollah: according to Phillip Smyth, an expert on Shiite armed groups, 5,000 to 8,000 fighters have been present on all main fronts and have played a major role in the Qalamun region, as well as the towns of Zabadani and Qusayr near the Lebanese border.

– Abu al-Fadl al-Abbas: a group of 3,000 Iraqi volunteers who defend the Shiite holy site of Sayyida Zeinab south of Damascus.

– Afghan “Fatimids“: up to 3,000 men have fought in Daraa province in the south.

– In the Palestinian refugee camp of Yarmuk south of Damascus, pro-regime Palestinian organisations are fighting rebels and jihadists.