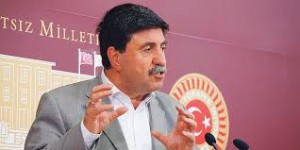 Pro-Kurdish Peoples’ Democratic Party (HDP) deputy Altan Tan states Turkey’s failed foreign policy and Erdoğan’s dream of supreme presidency as the main factors behind the “chaos” Turkey has found itself in as it faces mounting terror.

The delicate balance in Turkey’s predominantly Kurdish southeast tipped over on Monday when an Islamic State of Iraq and the Levant (ISIL) suicide bomb killed 32 activists in Suruç who were heading to Syria to take part in the rebuilding of the Kurdish town of Kobani after the defeat and withdrawal of ISIL in March. This event sparked unprecedented and mixed activity in Turkey.

In response, the main Kurdish armed-and-outlawed group the Kurdistan Worker’s Party (PKK) has retaliated by killing police officers in a tumultuous week that has since featured thousands of detainments in counterterror raids and the bombing of ISIL locations in Syria and PKK camps in northern Iraq.

In his interview with Bugün daily, Altan Tan reiterates criticism of the government’s failure to tackle the problem of foreign fighters transiting over the country, on route to crossing into Syria and joining ISIL’s ranks. “The operations now being conducted against ISIL are a direct result of misguided policies which failed to take precautions and observe developments in a timely manner,” concludes Altan Tan, who sees the future outlook of the country heading towards a dark destination of uncertainty and war. He sees these developments as a foreign conspiracy perpetrated by “coalition forces, who plan to drag Turkey into war starting off from the southern provinces, spreading to the west.” He warns Turkey is heading to a direction “where there is no turning back,” adding that the country is becoming “ungovernable”.

Altan Tan also criticized the deadly attacks conducted by the PKK after Monday’s bombing, “The killing of police officers in Adıyaman, Diyarbakır and Ceylanpınar are not acceptable under any circumstance.”

The developments of the week have also by and large spelled the end of the shaky peace process launched by the AK Party government and Erdoğan in 2012, aiming to disarm the PKK whilst expanding the Kurdish minority’s democratic rights.

The process had already been given a major blow in run up to the June 7th general election with President Erdoğan backtracking on the process he so championed and spearheaded; instead saying that ‘Turkey had no Kurdish problem’. “Whether or not the PKK comes down from the mountain, the state needs to continue democratic reforms,” he noted, “Our wish is for the PKK to abandon its armed struggle within Turkey.”

The sudden turn of rhetoric by Erdoğan was viewed as a political move aimed at stopping the nationalist votes from drifting away from the AK party. In an election where Erdoğan hoped to have the AK party win 400 votes in order to implement a constitutional reform which would grant the presidency more powers, the result was a shock for the ruling party. The AK Party won only 258, not even enough to form a government on its own, and losing the single party rule which it had enjoyed for 13 years.

Tan believes that the events are a consequence of Erdoğan’s appetite for more power, “Turkish politics has been in chaos ever since Erdoğan has decided to pursue the wild notion of a new presidential system he had in his mind.”

The HDP deputy states that the Erdoğan and the AK Party are in a state of mind where they are willing to sacrifice all in order to retain power, “They are in fear that they would end up in jail, or will not be able to live in Turkey and would have to leave. This is their psychology.”