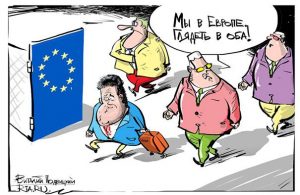 What are pro-Kremlin caricatures like? One good example is the work of Vitaly Podvitsky, whose drawings appear as illustrations for news stories published by RIA Novosti – the state-owned news agency where Dmitry Kiselev, currently under EU sanctions, is the CEO, like reported by euvsdisinfo.eu.

Ukraine and the EU are among the most frequent targets in these caricatures, which often invoke well-established propaganda messages – such as the image above.

On this picture, Ukrainian President Poroshenko is travelling to the EU after his country has achieved visa free access to the Schengen zone. However, his body guards nervously comment that “We’re in Europe now, so we’ll have to stay alert!”

The image illustrates a news story about Russian President Putin’s statement that Ukrainian visa-free travellers could meet people “wearing light-blue uniforms” in the EU. As “light-blue” is a Russian expression for homosexuality, and with President Poroshenko wearing a light-blue suit, the body guards’ concern refers to the fear that the President could attract the attention of gay men in the EU – who are a very serious problem for societies in the European Union, if one is to believe pro-Kremlin disinformation.