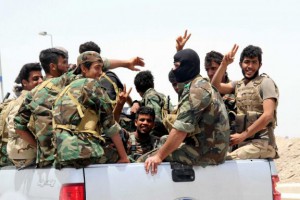 Pro-government fighters have retaken a southern Yemeni city from Shiite rebels in their first significant advance since a Saudi-led coalition began striking the rebels in late March.

Officials and witnesses in the southwestern city of Dhale said Tuesday that pro-government fighters also captured the command center of the 33rd Armored Brigade.

The brigade, which once controlled the city, is one of the country’s largest army units. It is loyal to ousted President Ali Abdullah Saleh, who is allied with the rebels, known as Houthis. Officials, speaking on condition of anonymity because they are not authorized to brief reporters, say the fighters seized large weapons and ammunition caches.

The fighters in Dhale are allied with exiled President Abed Rabbo Mansour Hadi, but also want an independent southern state.