You are here: Home / Analysis / Pressed in Iraq and Syria, ISIS lashes out in Egypt

Amid battlefield setbacks, Sinai jihadists carrying out terror attacks in ‘an attempt to regain the narrative, boost morale,’ analysts say, like reported by timesofisrael.com 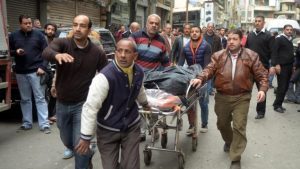 The twin bombings of churches in Egypt suggest that Islamic State group jihadists are lashing out as they find themselves coming under increasing pressure in Iraq and Syria, analysts say.

The group’s Egyptian affiliate which claimed Sunday’s attacks in the Nile Delta cities of Tanta and Alexandria has been centered in the Sinai Peninsula, where it has killed hundreds of policemen and soldiers.

But IS has been unable to seize population centers there, unlike its early gains in Iraq and Syria, and it has also lost top militants to Egyptian military strikes in recent months.

The jihadists have attacked Egyptian Coptic Christians before, but their campaign against the minority picked up in December with a Cairo church bombing that killed 29 people.

In Sinai, IS militants killed seven Copts in January and February, forcing dozens of Christian families to flee the peninsula that borders Israel and the Gaza Strip.

“IS and its supporters online have been methodically introducing more radical sectarian concepts to Egyptian jihadists since the December bombing,” said Mokhtar Awad, a research fellow with George Washington University’s Program on Extremism.

The December bombing in a church adjacent to the Coptic papal seat marked a shift in IS tactics.

“It was not until December 2016 when the Islamic State began a systematic campaign to target Coptic Christians in Egypt,” said Jantzen Garnett, an expert on the jihadists with the Navanti Group analytics company.

“As the Islamic State is squeezed in Iraq and Syria it often conducts spectacular attacks elsewhere in an attempt to regain the narrative, boost morale and win recruits,” he said.

In Iraq and Syria, where the group proclaimed its “caliphate” in 2014 as it swept across northern Iraq, IS has faced consecutive defeats over the past year and is on the verge of losing control of Iraq’s second city Mosul.

In a video released in February, IS attacked Christians as “polytheists” and promised there would be further attacks.

After Sunday’s bombings in Tanta and Alexandria, the group said it had deployed two Egyptian suicide bombers against the “crusaders.”

The Copts, who make up about 10 percent of Egypt’s 90 million people, have been attacked by Islamists for years, more so after the military overthrew Islamist president Mohamed Morsi in 2013.

The Coptic Church was accused by the Islamists of supporting Morsi’s overthrow which led to a bloody crackdown on Islamists, although Muslim clerics and politicians also backed his ouster.

Even before Morsi was toppled, jihadists had targeted the Christians, most notably in a 2011 New Year bombing of a church in Alexandria which police blamed on a group linked to Al-Qaeda.

The three church attacks in December and now April also suggest an expanded presence of jihadist cells west of the Suez Canal separating the Sinai proper from the rest of Egypt.

Following the December bombing, Sisi said members of the jihadist cell who carried it out had been caught, but others remained on the run.

“The Islamic State has struggled, with constant setbacks, to establish a sizable presence on the Egyptian mainland over the preceding years. These church bombings indicate they have a growing presence on the mainland,” said Garnett.

The IS affiliate’s predecessor in Egypt, Ansar Beit al-Maqdis, had carried out several attacks targeting the police on the mainland before pledging allegiance to IS in November 2014.

And several IS bombings and shootings took place in Cairo, also targeting policemen, before the December church bombing.

Police arrested several cells and in November 2015 announced they had killed a top IS jihadist, Ashraf al-Gharably, in a Cairo shootout.