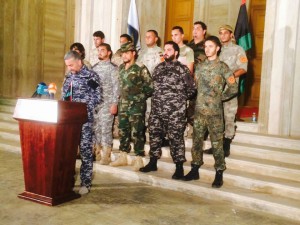 The Presidential Guard said on Sunday the Libyan political agreement signed in Skhirat, Morocco, was reached to reinstate the military rule after four decades of dictatorship, confirming it will now back the General National Congress.

In a statement read from the parliament building, the PG indicated that the UN-installed Presidency Council has failed to provide basic needs of people and win the Libyan consensus while security and economic crises have deepened since its arrival in Tripoli.

“We agreed with other revolutionary brigades to restore legitimacy to the GNC, the only legitimate authority in Libya after the Supreme Court ruling in November 2014.” The statement said.

Meanwhile, the High Council of State has vowed to arrest the defected members of the Presidential Guard while council member Abdul-Rahman Al-Shatar confirmed the council is still operating and it would relocate in another HQ to implement the political agreement.

The Head of Investigation Bureau at the Office of the Attorney General Siddiq Al-Soor has also issued an arrest warrant for the defected members of the Presidential Guard, similar to the one issued for renegade General Khalifa Haftar in 2014 when he staged a coup against the GNC and then-government of Ali Zidan.