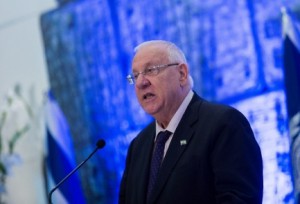 “The Islamic State is already here; that is no longer a secret. I am not speaking about territories bordering the State of Israel, but within the state itself,” President Reuven Rivlin warned Monday.

Addressing the ninth annual conference of the Institute for National Security Studies, held at the Eretz Israel Museum in Ramat Aviv, Rivlin said, “Research studies, arrests, testimonies and overt and covert analyses — many conducted by the INSS — clearly indicate that there is increasing support for the Islamic State group among Israeli Arabs, and some are actually joining up.”

According to the president, “Anyone familiar with Arab society knows that in recent years there has been considerable radicalization in some Bedouin settlements in the south, and in Arab towns and villages in the north, on the issue of implementation of Shariah [Islamic] law. We are even seeing the influence of extremist ideas in areas and groups identifying as secular.

“In various villages, at political rallies, even ones attended by members of Knesset, we have seen the black flag of Islamic State being waved. There is growing support for Islamic State on our social media and more and more moderates are feeling threatened, feeling that the rug is being pulled out from under them.”

Rivlin continued, “The threat of Islamic State is not unique to Israel. It is not a product of the Israeli-Palestinian conflict, quite the opposite even. It is impossible to draw a clear political and geographical ‘axis of evil’ around which to focus our forces or the enemy.”

The president stressed that his warning was not an indictment of the Arab population in Israel, but said that he expected the Israeli Arab leadership to show responsibility. He said the Arab leadership’s condemnations of violence were sometimes too weak or forced, mainly suggesting cowardice.

“The voices blaming the ‘occupation’ for all the resident evils, expressing ‘sympathy and understanding’ toward violence directed at innocent people — they are a stain on a population that needs a clear voice of guidance above all else,” Rivlin said.