You are here: Home / MidEastGulf / Prepare for a “balkanisation” of the Middle East 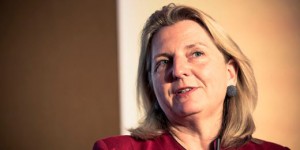 It is not the immediate problems with Isis and Syria that investors should be focused on in the Middle East, but the upcoming war of succession in Saudi Arabia, according to energy analyst Dr Karin Kneissl.

Speaking at the Wealth Manager Retreat at the Grove in Hertfordshire earlier this month, Kneissl examined the role of geopolitics in the oil market and asked how relevant it remains when there are so many moving parts.

On one hand, she said that in an oversupplied oil market, the role of Saudi Arabia and the return of Iranian production could have significant implications for the oil price.

Alternatively, despite escalating conflict in the largest oil-producing region in the world, supply has not dwindled and the oil price remains depressed.

‘In Saudi Arabia, it is all about the welfare state that the Saudis have to finance to keep their young people at bay. When we look back at what has happened in the past 18 months, there was a fairly stable price, which contained the risk premium of $30,’ she said.

‘It was stable because Asia, and China in particular, was driving the demand. Despite all the wars, despite all the conflict, despite the situation in oil-producing and transit countries, the price went down so much.

‘We might also experience something like a peak in demand. This peak in demand becomes even more interesting when we look at the transport sector.’

Kneissl said that we could be witnessing what she has called the end of the ‘Westphalian’ order. This, she explained, was the advent of the territorial state following the wars in the Balkans creating a community around citizens and not believers.

‘That territorial state, the colonial powers exported to the Middle East and it now looks like it is being replaced by the “ummah”, the community of believers,’ she said.

‘When you look now into the Middle East and the Islamic State, the community of believers is apparently more important than the community of territory. We will see a Balkanisation which will end up in ethnic “statelets”.’

She also highlighted that there is still more supply from the conventional sector, led by Israel exploring the Leviathan fields.

Kneissl cited new findings by the Italian oil company Eni, off the shore of Egypt, which she said ‘turns the contract that the Egyptians were about to sign with the Israelis
upside down’.

‘Egypt used to export gas. Now we see a very fresh supply of gas in the Eastern Mediterranean, which might first and foremost be for regional consumption and then gas for the European market,’ she said.

‘There is more conventional gas coming to the market much closer to Europe, when you compare it to the unconventional American gas for which you need LNG terminals, which you don’t have in Europe.’

Kneissl pointed out that Russia has been increasingly looking to the East, while the West still wants to continue business ties.

However, she said, the engagement is moving east. There is increased cooperation between Russia and China, which she said started back in 2004.

‘The Siberia pipeline that should bring gas that was supposed to go to the European markets now goes to the Asian market. The pipelines are turning east for economic reasons, for political reasons and for many others. This cooperation will remain with us,’ she said.

The developments in the Middle East could also result in China becoming a more active player, she warned, as the world’s second largest economy will not just stand by and watch as events unfold in the Middle East. ‘Chinese foreign policy ever since the 1990s was shaped by its energy interest. Until 1994, China could satisfy its national oil consumption by its own national production. For the past two years, China has become the number one importer of oil,’ she said.

‘Everyone is affected by what China is doing in the energy business.’

Kneissl believes EU decision-makers have not quite understood the importance and intricacies of what is happening in the eastern Mediterranean, Syria or Middle East in general.

‘The price report for the past month shows us that the engine of China is slowing down. However, China remains an issue and a close monitoring is needed of whatever it does, not only as an oil consumer but also as a geopolitical actor in oil-producing countries.’