You are here: Home / Mediterranean / Power plant hit by shelling in Libya’s Benghazi 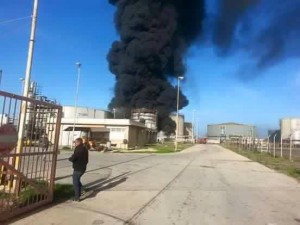 A major power plant in the eastern Libyan city of Benghazi has been attacked by militants, an army commander and a plant employee said on Saturday.

The employee said the shelling started late on Friday evening and continued into the morning, shutting down one of the plant’s units and starting a fire that sent black smoke billowing into the sky.

The fire was later extinguished, he said.

Military Commander Fadhal al-Hassi told Reuters Islamic State fighters were to blame. This could not be independently confirmed, though other Islamist groups operating in Benghazi do not tend to target civilian infrastructure.

Libya has slipped into turmoil following the uprising that toppled Muammar Gaddafi in 2011, with rival militias, factions and governments competing for power and for the country’s oil wealth.

On Thursday, dozens of police recruits were killed in a truck bombing claimed by Islamic State in the western town of Zliten.

The Petroleum Facilities Guard said the last of those fires were put out on Friday.

Benghazi has seen months of heavy fighting between Islamist militants and military forces allied to the country’s recognized, eastern-based government.

The power plant, which supplies much of eastern Libya, currently has an output of 910 MW. That is some 170 MW short of demand, meaning power is rationed to residential parts of Benghazi for several hours a day.

It was unclear how output might be affected by the shelling on Friday and Saturday.