You are here: Home / Analysis / Possible US air strike on Syria: three scenarios for how it could play out

The US President is taunting Russia, Britain is moving submarines to striking distance and all options are on the table. 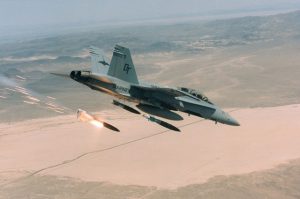 Fears of full-scale war are spreading on Twitter, in the wake of Donald Trump’s taunts to Russia to “get ready” for missiles to be fired at its ally Syria.

Meanwhile, Britain has begun moving submarines within missile range of Syria, in readiness for a potential strike. And British Prime Minister Theresa May has called a cabinet meeting widely expected to result in the UK joining a military response against Syria.

The White House says President Trump has not set down any timetable for a military strike, and that all options remain on the table.

But what are Donald Trump’s options, and what would happen next?

The easiest, most likely option for the US is to launch a short-term, symbolic air attack, as it did a year ago following a chemical weapons attack at Khan Sheikhoun that killed 90 people.

About 60 US Tomahawk missiles targeted the Shayrat airbase where the Syrian warplanes that dropped the chemicals had taken off.

It was the first direct US assault against the Syrian regime, and destroyed an airstrip, aircraft and fuelling stations. For a brief time there was speculation the US might enter the war on a bigger scale and change the war’s direction.

But the impact of that strike was short lived. The damage was mostly confined to a single airbase. A year on, the Assad regime remains in power, in an even stronger position than before. Syrian forces have tightened their control over the country and ousted rebel fighters from key strangleholds.

There’s no reason to believe another token strike this time would be any different.

With Russian forces continuing to prop up the Assad regime and Iranian-backed militias on the ground, it would take far more than a single barrage of US missiles to have any impact on the war.

Other than a bit of collateral damage, it would do little more than send a message to Assad and his forces that further chemical weapons attacks will be punished with similar strikes.

To contain the US response to, at most, a single air strike, Russia may need to step in more forcefully to pacify the Assad regime.

“Moscow is in the driver’s seat in Syria but reluctant to put the car in gear,” Joost Hiltermann wrote for the Lowy Institute earlier this year.

“Yet Russia may have no choice … if it wishes to preserve its gains: the survival of the Assad regime and the prospect of a pacified Syria.”

A broader and more sustained assault would cause greater damage to the Assad regime by destroying key military and government infrastructure. It might finally force the regime to stop its sporadic chemical attacks on civilians in rebel held areas, albeit even as those areas shrink and rebel fighters are ousted.

But such a move risks bringing the US and Russia into direct warfare, which could lead to an escalation of the conflict outside Syria’s borders.

And given the US reliance on Kurdish fighters, it would further inflame the conflict between Kurdish groups and Turkey, which has already sent troops into northern Syria to fight Kurdish forces.

“Any strike large enough to carry substantial costs for Assad risks undermining the only remaining semblance of state in Syria and creating more chaos,” tweeted Emma Ashford, a research fellow at the Cato Institute in Washington.

Without a doubt such a scenario would cause even greater bloodshed on the ground, where Syrian civilians have paid the highest price for the war. Those Syrians saved from gassing might simply die by other means. The loss of lives, homes, hospitals and schools would continue indefinitely.

A worst-case-scenario could see the war spill beyond Syria’s borders and embroil many of the world’s key military powers. Britain and France have indicated support for US air strikes. And with Russian and Iranian forces against them, it’s not so far fetched to think an escalation in the war could be a precursor to world war three.

Previous world wars have been triggered by less. Throw Israel into the mix — in the wake of its recent air strikes on Iranian drones in Syria — and who knows what could happen.

Many question why the US doesn’t simply assassinate Bashar al Assad. But even with the demise of the Islamic State group, there are enough jihadist and rebel groups still active in Syria to fill the gap.

Witness the aftermath of similar intervention in Libya, where the US and its allies succeeded in ousting the dictator Muammar Gaddafi, only to see an upsurge in jihadist violence, tribal fighting and ongoing political instability in the years since.

“The power vacuum that would follow the sudden removal of Assad could be worse than the current warfare, and nourish the already fertile conditions for violent extremist and paramilitary actors,” wrote David Alpher, adjunct professor at the School for Conflict Analysis and Resolution, George Mason University.

“Assad shouldn’t remain in power. He’s been proving that for seven years. But my experience tells me his removal should be political and legal. That process must come from the Syrians themselves, not from the outside.”

As paradoxical and heinous as it seems, the most likely way to end the bloodshed in Syria — at least in the short term — might well be for the rebel forces to cede control of opposition-held areas and effectively accept defeat.

But for many Syrians who’ve fought so long and lost so much — they’d surely die before contemplating such a possibility.