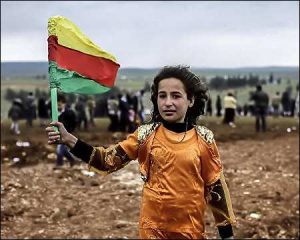 Kurdish autonomy in Syrian Kurdistan, the north of Syria, has every chance of gaining recognition under a number of scenarios, following the examples of South Ossetia or Kosovo, according to Syrian dissident Salah Eldin Bilal, the head of the Asbar Center for Research and Studies in Dusseldorf, Germany.

He further said that the de facto autonomy of this region still needs to gain international recognition.

“We are currently analyzing various variants under which the region could gain the recognition of the international community without appealing to the UN. We could take as an example the scenario of Moldavia [Transdniester], Abkhazia or South Ossetia,” Bilal said at a news conference at Rossiya Segodnya news agency.

Another scenario could be a partial recognition of the region’s autonomy, which could be then sealed by an international decision and a resolution, the way it happened with Kosovo, he said. However here the US and Turkey should play a certain role, which is not very clear at the moment.

In 2008, Albanian authorities unilaterally declared Kosovo to be independent from Serbia. Serbia, as well as Russia, objected the declaration, which violated Resolution 1244 of the UN Security Council (1999), which had reaffirmed the sovereignty and territorial integrity of Serbia, including Kosovo and Metohija.

Serbian leaders repeatedly stated that they do not recognize the independence of the region.

According to different estimates, the independence of Kosovo has been recognized by 100 or 110 UN member states, including the US and the leading Western European countries. Serbian authorities previously refuted the claims of Pristina (the capital and largest city within Kosovo) that its independence had been recognized by Oman, Guinea Bissau and Uganda. There had also been reports that other states voluntarily revoked their recognition.

Syrian Kurdistan’s ruling PYD has established three autonomous zones, or Cantons of Jazeera, Kobani and Afrin and a Kurdish government across Syrian Kurdistan in 2013. On March 17, 2016 Syria’s Kurds declared a federal region in Syrian Kurdistan. Since December 2016, it was renamed to North-Syria Democratic Federation.

On December 29, 2016 Syrian Kurds and their allies approved a blueprint for a system of federal government in Syrian Kurdistan, reaffirming their plans for autonomy in areas they have controlled during the civil war.

U.S regards the Syrian Kurdish Democratic Union Party PYD and its powerful military wing YPG, which is part of Kurd-Arab SDF alliance, as key ally against Islamic State and the most effective fighting force against IS in Syria and has provided them with arms, air support as well as the military advisers.

The YPG, which has 60,000 fighters, has seized swathes of Syria from IS.