You are here: Home / Europe / Possibility of chemical or biological attack in UK getting closer 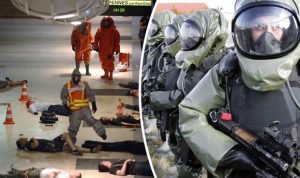 The possibility of a terrorist attack involving chemical or biological weapons is getting closer, Britain’s security minister and top counter-terrorism police officer warned on Tuesday, according to reuters.com.

“I see plots where the only limit to the ambition of our adversaries is their imagination,” Ben Wallace told a security conference in London.

“As I speak, terrorists continue to explore new ways to kill us on our streets: chemical and biological weapons are marching in closer. They have developed and worked on a better arsenal. We have to be prepared for the day that might come to our streets here.”

Last year, Britain suffered five attacks that the authorities blamed on terrorism that killed 36 people, four of which were carried out by Islamist militants.

In addition, police say another 17 plots were foiled and the national threat level remains at “severe”, meaning an attack is considered highly likely.

“So I think he is as concerned as I am that these are the kind of threats we’ve got to take very seriously and we have got to make sure we have the right preparations to counter that threat.”

British security services, like those across Europe, have been worried about those who left the UK to fight on behalf of Islamic State in Iraq and Syria, returning home and bringing back the knowledge they learned on the battlefields there.

Wallace said about 900 Britons had gone to fight in Syria and Iraq and just under half had returned while more than 150 had been killed.

Basu also repeated a warning from police that failure to strike a deal with the European Union that allowed Britain to continue sharing and receiving intelligence with their European colleagues would harm the fight against terrorism.

“The loss of one or more of these measure, particularly covering areas such as intelligence-sharing, surveillance, pursuit and extradition, would have a significant operational implication for us.”