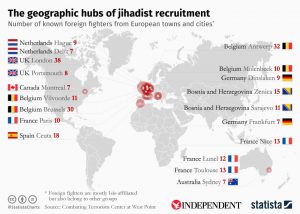 There has been recent positive traction in the effort to repatriate foreign fighters who joined the so-called Islamic State captured in Syria. Some foreign fighters held by the Syrian Democratic Forces (SDF) are, according to an August 7, 2018 Associated Press (AP) article, being returned to their respective home countries, like reported by soufangroup.com.

The issue is one of tremendous importance, both in the short and long term. In the short term, repatriating fighters to their countries of origin is necessary to avert a crisis; it is simply unsustainable to have so many fighters held in temporary detention facilities—especially by a non-state actor in a country embroiled in a civil war. The risk of detainees escaping and committing acts of terrorism in their home or other countries is not inconsiderable.

The damage that can be wrought, even by a handful of truly committed and experienced foreign fighters, was made clear by the terrorist attacks in Paris and Brussels. The SDF is not the answer to the pressing need of the detention, prosecution and subsequent determination of the appropriate action to take, for the estimated 600 foreign fighters now held in northern Syria.In the long term, dealing with this situation appropriately is essential to success in the larger fight against terrorist groups, including the Islamic State and al-Qaeda.

The SDF, as a non-state actor, is not capable of conducting fair trials within an established judicial system and then meting out appropriate verdicts and sentences. The U.S. continues to experience the predictable—and avoidable— negative consequences of trying to use extra-judicial measures to deal with terrorism.

The shameful continued existence of GTMO—where no one has yet been tried for the September 11, 2001 attacks—is in stark contrast to the effectiveness and transparency of U.S. federal civilian courts, which have handled hundreds of terrorism cases since 2001. The SDF detentions are a result of battlefield necessity, but now it is time for countries to assume their legal burdens—burdens that are the hallmark of the very types of societies which the Islamic State and al-Qaeda reject.According to the AP article, Macedonia has recently taken custody of seven of its citizens who were captured by the SDF while fighting for the Islamic State; an estimated 150 Macedonians traveled to join the Islamic State.

As noted by Pentagon spokesman Eric Pahon, ‘this marks a significant milestone in the much-needed cooperative effort to combat the global threat of terrorism.’ Macedonia stated on August 7 that the seven returned detainees were now in Macedonia and would face charges of ‘participation in a foreign army, police and paramilitary formations.’In early August, Lebanon announced that it had repatriated eight Lebanese nationals from SDF detention, all of whom would face trial. The U.S. brought a U.S. citizen back in early August; he faces federal charges.

The more that countries display the attitudes and values that distinguish them from terrorist groups, by repatriating citizens and delivering justice in a fair and transparent way, the stronger the message against the Islamic State and other violent groups. Free and democratic societies cannot fight terrorists by the standards of terrorists and expect the messages of freedom and democracy to win out.