You are here: Home / Africa / Portuguese soldier killed in an Islamist attack in Mali 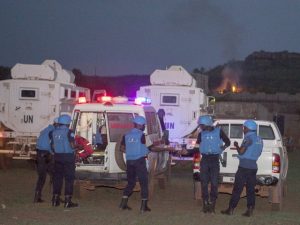 Staff Sergeant Paiva Benido (40), the father of two young children was part of the Portuguese contingent on the European Union Training Mission to Mali comprised of ten members, like reported by theportugalnews.com.

An army statement said that the soldier was killed “because of fighting following a rebel attack that caused other injuries among the soldiers”.

Other soldiers were injured, “including one Portuguese”, who “has completely recovered”, the statement said.

Following the incident, Portugal’s minister of foreign affairs said that his country’s commitment to the European Union military training mission in Mali “continues to be total”, despite the killing in Bamako on Sunday of “a valiant and brave Portuguese army sergeant”.

Augusto Santos Silva, who was representing Portugal in the EU’s foreign affairs council, told journalists that during a debate and adoption of conclusions on the fight against terrorism, he assured his fellow ministers that Portugal remains fully determined to contribute to the EU’s work in the region “with other multilateral organisations, with its partners in North Africa, in the Middle East, in the Horn of Africa and also in the Sahel.”

That, he went on, included the training mission in Mali, despite the “terrorist attack” on the EU mission.
Santos Silva said that other ministers had expressed “solidarity” with Portugal after the incident.

The EU’s foreign policy chief, Federica Mogherini, had earlier expressed her condolences for the death of the Portuguese soldier and a local who was working for the EU delegation, and her “respect, admiration and appreciation” for the work of the EU mission in Mali.

Attack took place at around 4pm local time at the Hotel Le Campement Kangaba on the outskirts of Bamako, an area where members of the mission are authorised to take rest and rehabilitation when not on duty.