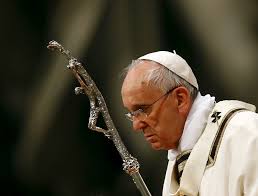 A planned visit by Pope Francis to strife-hit Central African Republic (CAR) this month is “risky” and French troops on the ground could not ensure his safety, France’s defence ministry said Wednesday.
“We have advised that it is a risky visit,” officials close to Defence Minister Jean-Yves Le Drian said.
The pope is expected in the country hit by clashes between Christians and Muslims from November 29 to 30 during a much-anticipated visit to Africa which will also see him travel to Kenya and Uganda. Hundreds of thousands of Christians are expected to flock to CAR, a former French colony, from neighbouring countries Cameroon and Congo.
“This is a country where neither the army nor the police force have been totally rebuilt,” said an official in the minister’s entourage. France’s 900 soldiers, who back up some 10,800 UN peacekeepers and African Union forces, will secure the airport and help provide medical evacuation if necessary but “cannot do more,” the source said.
A UN peacekeeper was killed in CAR Tuesday amid a new spike in sectarian violence.
At least 61 people were killed and over 300 injured in such violence in late September in Bangui before UN and French peacekeeping forces intervened. One in 10 Central Africans — 460,000 people — have sought refuge outside the country, mainly in Cameroon, Chad, DR Congo and Congo, since 2013.
standardmedia.co.ke