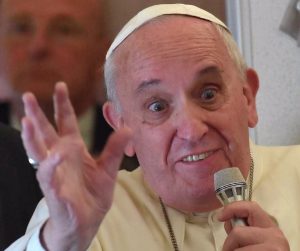 Pope Francis urged political leaders to defend migrants, saying their safety must take precedence over national security concerns and that they must not be subjected to collective deportations, like reported by reuters.com.

His challenge to politicians, made in a comprehensive position paper on migrants and refugees, again appeared to put him at odds with the restrictive policies of a number of governments dealing with growing popular anti-immigrant sentiment.

“Solidarity must be concretely expressed at every stage of the migratory experience – from departure through journey to arrival and return,” he said in a message ahead of the Roman Catholic Church’s World Day of Migrants and Refugees.

Calling for “broader options for migrants and refugees to enter destination countries safely and legally,” he said the human rights and dignity of all migrants had to be respected regardless of their legal status.

“The principle of the centrality of the human person … obliges us to always prioritize personal safety over national security,” he said.

This appeared to be a reference to fears voiced in many European countries that refugees inflows could lead to security problems in their host countries. He said it was necessary “to ensure that agents in charge of border control are properly trained.”

He called for “alternative solutions to detention” for illegal immigrants and said “collective and arbitrary expulsions of migrants and refugees are not suitable solutions”.

Francis said migrants should be seen as “a true resource for the communities that welcome them” and be given freedom of movement, access to means of communication, access to justice and everyday rights such as opening a bank account.

Francis, an Argentine who has made defense of migrants a major plank of his papacy, has criticized anti-immigrant stands by national leaders including U.S. President Donald Trump. Last year, Francis condemned then-candidate Trump’s intention to build a wall on the border with Mexico.

Migrant children deserved particular protection, the pope said. They “must be spared any form of detention related to migratory status,” guaranteed access to primary and secondary education and have the right to remain when they come of age.

Francis’s message immediately drew the ire of the right-wing Northern League party in Italy because it implicitly supported a controversial law proposal that would grant citizenship to children who are born in Italy of immigrant parents.

“The universal right to a nationality should be recognized and duly certified for all children at birth,” the pope said.

Northern League leader Matteo Salvini responded: “If he wants to apply it in his state, the Vatican, he can go right ahead.”

World leaders are due to commit their countries to two global compacts, one on refugees and the other on migrants, by the end of 2018 under the auspices of the United Nations.