You are here: Home / MidEastGulf / Poll: in Syria only 21% prefer life now to what life was like under the control of al Assad 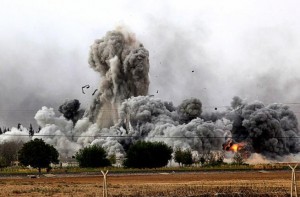 UK-based ORB International polled more than 1,300 Syrians and 1,200 Iraqis, a cross-section of most governorates, and got responses that may surprise you.

One out of five Syrians thought Daesh (ISIS) had a positive impact on the conflict, compared with only 5 percent of Iraqis. One of five Syrians also said life was better now than life under President Bashar al-Assad.

More significantly, four out of five Syrians and 85 percent of Iraqis believed Daesh was created by foreign or American entities. More Syrians and Iraqis opposed the US-led coalition airstrikes than favored them.

Keep in mind, the demographics say a lot about these answers. The study had about four times more responses from Syrians in regime-held territories than in Daesh-held ones. So the poll is skewed and provides less insight to what life is really like under the militants.

It’s also likely that women’s lives in Daesh-held towns are significantly worse than men’s lives; while the numbers say they interviewed nearly as many women as men, the study doesn’t specify how many of those women came from Daesh territories.

The answers from people affected directly by the conflicts go to show — there’s a wide disconnect between Western worlds and war-torn countries, and the Syrian voice is often muffled.