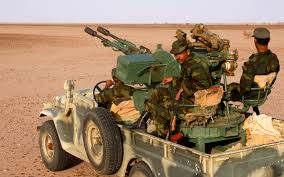 Polisario’s Front security forces in the Tindouf camps have allegedly coordinated an unprecedented act of disobedience, refusing to obey orders from their “Saharawi Minister of the Interior”.

Security forces have coordinated this act as a reaction to a decision by the “Saharawi Minister of the Interior” Hama Salama, prohibiting them from operating outside their scope of action, namely the “wilayas” (districts) where they are supposed to be confined.

Multiple media reports in the Tindouf camps said Hama Salama made this decision based on suspicions that some of their own security forces were linked to organized crime networks and drug trafficking, as well as the smuggling of weapons and cars.

A report by Future Sahara said the security services have refused to implement Hama Salama’scommand.

A number of media reports agree this is an unusual rebellion by security personnel against the Supervision Department and, by extension, it is a revolt against the General Secretariat of the Polisario Front.