You are here: Home / Europe / Police raids to crackdown on ISIS stronghold in Europe as extremists secretly buy up land 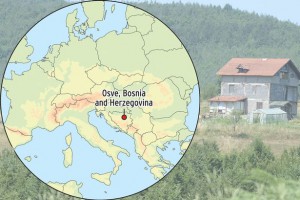 Local security services have staged a series of raids in Balkan countries following revelations that Islamic State terrorists have been secretly buying up land in mainland Europe.

The swoops follow an exclusive Sunday Mirror investigation which revealed that IS had developed new training grounds in the region.

Locals in the Bosnian village of Osve told our investigators that they regularly heard gunshots and a terrorism expert warned that the village is “a major threat” after it become a hideout for terrorists on the run, and a training centre for new recruits before they go to fight in Syria and Iraq.

Raids took place in five major cities across Macedonia, including the capital Skopje, and were aimed at smashing a network of recruiters and organisers for the terrorist group.

Macedonian police raided 25 homes, the Yaya Pasha and Tutunsuz mosque in Skopje, an internet cafe and the offices of two Islam-linked NGOs identified as Spark of Grace and Islamic Youth.

The nine arrested are aged between 19 and 49 and have all been detained for 30 days as police continue their investigation.

Now a senior police source in Kosovo has warned that IS is preparing a huge attack on mainland Europe.

One insider said: “There was a reluctance to talk about this in the region but the Sunday Mirror report opened the floodgates and suddenly everyone was talking about it.”

And a senior police source in Kosovo, speaking on condition of anonymity with the Sunday Mirror, has now warned that Islamic State is preparing a huge attack on mainland Europe, and that many IS recruits are based in the UK, Germany and Austria.

The high-ranking officer said: “There are thousands of Kosovo Albanians and those saying they are from Kosovo who are in the Great Britain, Germany and Austria and involved in terrorism.

“They get permits and visas and say they are religiously persecuted to hide their real activities. There are literally thousands of them.

“When the attack comes it will come from Europe, not Syria.”

The entire region is now on red alert and police in Macedonia admitted this week that they have arrested nine IS terrorists and revealed they are hunting 27 more.

Interior minister Mitko Chavkov said: “The mere fact that these people were present on those battlefields and have returned here is an indicator that terrorist acts against Macedonia are a real possibility.”