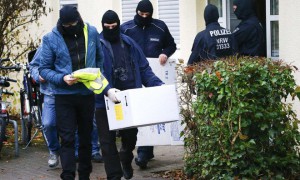 German police on Tuesday carried out sweeping raids on mosques, apartments and offices across 10 states in a probe against a group suspected of propagating hate and inciting 140 youths to fight alongside Daesh militants in Syria and Iraq, the interior ministry said.
The group called The True Religion (Die wahre Religion) is now also banned, Interior Minister Thomas de Maiziere said.
“Across the country, jihadist Islamists came together in this group named The True Religion,” he said.
“Under the pretext of promoting Islam, under the pretext of supposedly harmless distribution of translated versions of the Qur’an that took place in pedestrian zones, hate messages were propagated and young people radicalized,” added the interior minister.
De Maiziere noted that after participating in the Qur’an distribution campaign organized by the group, “140 young people traveled to Syria and Iraq where they joined the fight with terrorist groups.”
The raids, which targeted around 200 homes and sites in 10 states including North Rhine-Westphalia in the west, Hamburg in the north and Baden-Wuerttemberg in the southwest, began at dawn.
Tuesday’s ban is the biggest such prohibition in Germany targeting radicals after another organization called “The Caliphate State” was outlawed in 2001.
De Maiziere stressed that Tuesday’s action is not targeted against the general distribution of translated Qur’ans, but against those who “abuse religion and who use it as a pretext to spread extremist ideology and to back terrorist organizations.”
“The 140 departures by the group’s activists speak for themselves,” the minister said.
According to figures released in May by intelligence services, 820 militants have left Germany for Syria and Iraq.
Almost a third have returned and 140 were killed while abroad, while around 420 are still in Syria or Iraq.
Germany has so far been spared large-scale jihadist attacks.
But it was shaken by two assaults claimed by Daesh and carried out by asylum seekers — an ax rampage on a train in Wuerzburg that injured five, and a suicide bombing in Ansbach in which 15 people were hurt.
Police said last month they had foiled an alleged plot by a Syrian refugee to bomb one of Berlin’s airports.
Authorities last week also announced the arrest of five men suspected of recruiting fighters for the Daesh group.