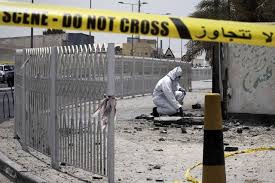 An explosion in Bahrain has killed one police officer and wounded seven other people, including a child.

The Interior Ministry described the explosion as a “terrorist blast.”

The wounded include four police officers, plus a married couple and their child.

The ministry said the incident happened late Friday in the predominantly Shi’ite village of Karanah.

Bahrain has seen frequent unrest since a Shi’ite-led uprising four years ago demanding greater political rights from the Sunni-led monarchy.