French authorities move to relocate 3,000 migrants to centers across the country 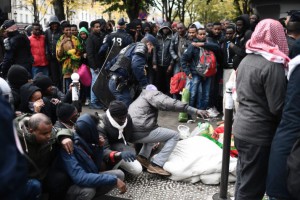 French police began dismantling a migrant camp in northeast Paris on Friday, the AFP reported, less than two weeks after the Calais encampment, known as the “Jungle” was emptied late October.

More than 3,000 migrants are believed to have set up makeshift shelters in Stalingrad, a working-class neighborhood in the capital’s 19th arrondissement. Most come from Sudan, Eritrea and Afghanistan.

Police arrived at dawn on Friday, and the evacuation proceeded calmly, according to reports. The area around Stalingrad has been cleared by police several times before, but still attracts migrants arriving in Paris.

Migrants will be taken to reception centers around the country. Many will return to the capital or go back to the north coast to resume their efforts to slip into Britain, activists say.

Paris Mayor Anne Hidalgo wrote to the national government last week, urging them to take action and decrying the “dramatic humanitarian and sanitary situation” of the makeshift camp.

Hidalgo also announced the city’s first government-run refugee camp, set to open this month in a disused railway yard in northern Paris. The camp will initially have the capacity to accommodate 400 people.