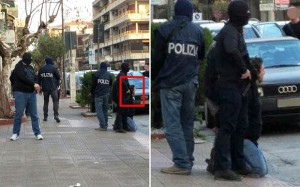 Italy’s tax police said they had found a clear link between people trafficking and militants after detaining a Syrian man who entered Italy on a migrant boat whom they allege to be a member of the Al-Nusra Front, now known as Jabhat Fateh Al-Sham (JFS).

A series of deadly attacks carried out by militants across Europe over the past year have fuelled a debate about how to handle the influx of hundreds of thousands of refugees and other migrants propelled by civil war in Syria, Iraq and Libya.

“Today’s operation is one of the few investigations which establishes a direct link between people who plan trafficking of migrants and…terrorist organisations,” the police said in a statement today.

The man landed on the coast of Calabria, southern Italy, in September 2014, the police said in the statement.

Over the past three years, more than 470,000 migrants, mainly from sub-Saharan Africa, have reached Italy by boat. At least 3,750 have died this year alone while making the crossing.

The detained man was previously kept in custody for helping smuggle migrants, the police said, adding a probe conducted immediately after his arrival revealed he was responsible for organising and managing the crossing.

Further investigations, an extensive analysis of digital files such as videos and photographs taken from a notebook and phones and questioning of the man showed he was a member of JFS, an Al-Qaeda offshoot, they allege.

JFS parted ways with Al-Qaeda in a highly publicised divorce earlier this year. It has long been acknowledged as one of the most effective groups fighting against Syrian dictator President Bashar Al-Assad.