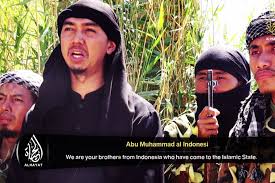 The latest data from the National Police shows that at least 350 Indonesians so far have joined the Islamic State movement in Syria, the country’s top cop said on Monday.

Gen. Badrodin Haiti also confirmed that Umar Jundul Haq, the son of 2002 Bali bomber Imam Samudra, has been killed in Syria while fighting with IS.

“There’s about 350 [Indonesian fighters], not including those using illegal channels,” Badrodin said. “But if you say there are 1,000 of them, that’s not the case.”

Umar, better known as Uncu, was believed to have joined IS two years ago. He would have been 19 by now.

Imam Samudra was executed in 2008 for his role in the bombings on the popular resort island, which killed 202 people and left another 209 people injured.