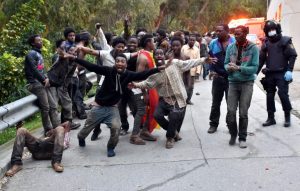 The migrants are breached the gates leading into Melilla, a Spanish enclave on the border of Northern Morocco, like reported by express.co.uk.

One police officer was injured in the incident after being “attacked by an immigrant with one of the hooks they use to clamber up the fence” – while four migrants received hospital treatment for minor injuries.

It is reportedly common for migrants looking to scale the two 20ft high fences bordering the city to use hooks as well as shoes studded with nails to gain purchase as they clamber over the border.

The 209 migrants who managed to make it across the barrier have since been taken to a migrant detention centre.

The Melilla fence guards one of the EU’s two land borders between the EU and Africa – with the other being the Spanish enclave of Cueta, which also borders Morocco.

It was doubled in height in 2005 after repeated attempts to gain entry to the Spanish autonomous city, which is the subject of a territorial dispute with Morocco.

The number is more than double that of the previous record high, which was set in 2016.

Last month Angela Merkel hit out at her fellow EU member states for a lack of solidarity when it comes to tackling the migrant crisis, highlighting deep divisions in the bloc.

The German Chancellor said it was “not acceptable” for EU members to shirk their responsibility to meet migrant quotas.

Speaking on the second day of December’s EU summit, Angela Merkel said: “We are not so in agreement as regards internal solidarity on the migration issue.

“In most areas, if not all areas, we show solidarity, as part of the EU.

“But there are some areas where solidarity is not shown and that is something I find not acceptable.”

Germany gave refuge to more than one million asylum seekers in 2015 and has been championing the policy of sharing refugees through quotas.

Bitter infighting erupted within the EU when Mr Tusk unveiled his plans to relocate refugees, exposing the deep divisions within the EU as to how to deal with the fallout from the aftermath of the 2015 migration crisis.

Mr Tusk sent a note to all the EU leaders last month which stated: “Only member states are able to tackle the migration crisis effectively.

“The EU’s role is to offer its full support in all possible ways.

“The issue of mandatory quotas has proven to be highly divisive and the approach has turned out to be ineffective.”

Several countries reacted angrily to the comments and his implication that the primary responsibility for the refugees should fall on the frontline countries such as Italy, Spain and Greece.

Mr Tusk was forced into a humiliating climbdown later in the day due to the pressure and issued a revised note which called for the EU institutions to work together with individual countries over migration issues.