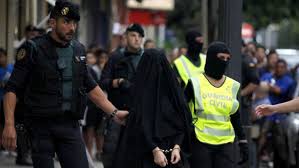 Spanish police have arrested a 22-year-old woman they suspect was planning to join the Islamic State armed group in Syria.

An Interior Ministry statement said the woman, a resident of the southwestern province of Huelva, was arrested Tuesday at Madrid airport as she prepared to fly to Turkey.

The statement said the Spanish woman had undergone a conversion to Islamic extremism and was suspected of maintaining contact with the armed group by Internet.

Spain has arrested dozens of suspected jihadi militants and recruiters, among them several women, in recent years.